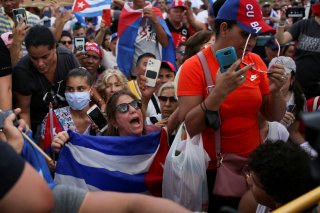 Cuba has recently riven by what the BBC has referred to as “the biggest protests in decades”. What appear to be largely spontaneous outpourings of anger at the hardship faced by many people are being blamed on a severe downturn in the economy, which contracted by 11% last year and has continued to slump in 2021. The protests reflect popular frustration arising from worsening shortages, growing queues and recent power cuts.

But Cuba’s current economic difficulties do not arise only from the pandemic: they are also the result of US policy.

Thanks to US hostility, Cuba remains barred from access to emergency international financing from multilateral financial institutions (including the IMF, World Bank or Inter-American Development Bank) that are helping to cushion the blow for its Caribbean neighbours. The country is also suffering from a series of measures introduced during Donald Trump’s administration to tighten US sanctions.

Starting in 2017 and accelerating towards the end of his term, these had cut the number of international visitors and curtailed remittances flows. They also interrupted deliveries of oil imports, hampered (and added significant cost to) international trade and deterred foreign investment.

Possibly the most damaging single measure, announced as a parting shot by Trump just ten days before he left office in January 2021, was the decision to return Cuba to the US State Department’s list of “state sponsors of terrorism”. At the time this received little attention. It was not heeded by US allies, such as Canada, the EU or the UK, which regard the US allegations as baseless, and continue their official engagement and fruitful collaboration with the Cuban government.

But, for international businesses, including financial institutions, the inclusion of Cuba on the list set off warning lights in compliance departments, which bear responsibility for minimising the risk of falling foul of international sanctions. In line with the process of “derisking” that has intensified in recent years as the capacity of regulators to identify suspicious transactions has increased, most businesses have refused to engage in transactions involving Cuba.

As a result, since January it has become increasingly difficult for any Cuban entities (including those sourcing medical supplies and food) to conduct trade, and almost impossible to arrange financing.

In 2020, Cuba’s performance in terms of containing the spread of COVID-19 was exceptionally positive. But the economic contraction, disease-prevention measures and the diversion of government money towards this effort was already creating severe hardships, with lengthening queues for basic goods and rising prices.

Then in January, Cuba experienced a second wave, with daily cases rising to an average of around 1,000 until June. And finally, they shot up alarmingly in July, to reach around 6,000. As of July 14, the cumulative death rate of 14.2 per 100,000 remains well below that of the US (now at at 182), but the daily number of deaths has reached 50.

One of Cuba’s home-produced vaccines has proved over 90% effective in phase 3 trials and the vaccine rollout has begun to bring case numbers down in the capital, Havana, but the pace of production is held back by US sanctions and the spread of the virus at national level remains exponential.

The combination of renewed COVID restrictions and diminishing resources have compounded people’s hardships. Also, the inflationary effect of a major currency reform, which aimed to eliminate the dual currency system, on January 1 2021, has added to a sense of insecurity. On top of all this have come power cuts caused by fuel shortages and technical problems.

The suffering has been particularly acute for those dependent on private sector activity. Between 2011 and 2017, around 1 million people – 15% of the working age population – had moved into the non-state sector, registered either as self-employed or as informal workers.

State sector workers received substantial pay rises in 2020 and have continued to receive wages (albeit reduced) during the pandemic. But many of those working in the private sector, which had been mainly dependent on the spending of foreign visitors, saw their earnings dwindle as a result of tighter US sanctions and then disappear altogether because of the pandemic, leaving them with only minimal social security.

The government has tried to protect the vulnerable and ensure that the basic needs of all Cubans are met, but its capacity to do so has been eroded. It has tried to control the prices of essential items, but growing shortages and rising prices in black markets have compounded the atmosphere of fear and desperation. At the same time, attempts by local authorities to respond to complaints about profiteers by suppressing black markets have brought conflicts. Resentments between Cubans have grown, and tempers are frayed.

The protests in Cuba sprang from real economic suffering, and daily frustrations and resentments. Since July 11, the government has introduced new measures in an attempt to placate protesters and signalled a willingness to listen to complaints, although with its limited resources it can do little to ameliorate conditions in the short term.

But the US government could do so, simply by reversing the Trump measures: a policy that was promised in the election campaign but has yet to be delivered.

Emily Morris is a Research Associate, Institute of the Americas, UCL