The Czech Plan to Assassinate This Nazi Was Absolutely Insane 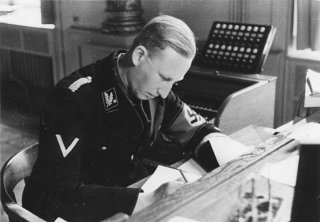 Here's What You Need to Remember: Some local Czech resistance leaders opposed the operation, fearing German reprisals. Yet the plan went ahead.

Reinhard Heydrich was tall, slender, blue-eyed, and blond, a perfect specimen of the ideal Nazi man. In his green Mercedes 320 Convertible B that morning, he might have been mistaken for a European playboy, or a rich, spoiled aristocrat.

But SS Obergruppenführer Heydrich was no more romantic than a hangman’s noose or a gas chamber. Ruthless and ambitious, he had risen to become chief of the Reich Main Security Office—second only to Heinrich Himmler in the Nazi security apparatus—and controlled such infamous agencies as the Gestapo. He chaired the Wannsee Conference in 1942 that finalized plans for the systematic extermination of European Jews. And to add one more accomplishment to his bloody résumé, in September 1941, he was appointed Reich Protector of Bohemia and Moravia, the Czech provinces that Germany had occupied in 1939.

Resistance against the Nazis had been sporadic. By the spring of 1942, the British had already tried to parachute agents into Czechoslovakia—with dismal results—and there had been a few acts of sabotage. But on that May morning, as Heydrich and his driver traveled from his home on the outskirts of Prague to his office in Prague Castle, it was a measure of his supreme arrogance that he disdained a bodyguard. Heydrich’s wife later said later Heydrich refused to believe that the Czechs would risk national suicide by killing him. Plans to sheath his Mercedes in armor were never implemented.

Some local Czech resistance leaders opposed the operation, fearing German reprisals. Yet the plan went ahead. On 10:32 a.m. on May 27, running uncharacteristically late after spending the morning with his wife and children, Heydrich and his driver Klein appeared at the bend in the road. Standing on the sidewalk, Gabcik opened his raincoat, pulled out his Sten submachine gun, and pulled the trigger.

Orders came down from Hitler: “Lidice was to be destroyed. The men were to be shot on the spot and the women sent to a concentration camp. Children worthy of Germanisation were to be handed over to SS families. The village was to be burned to the ground and its remains leveled so that no trace remained."

On June 9, 1942, Lidice was wiped out. The Nazis executed 199 men and deported 195 women to the Ravensbrück concentration camp. Of the ninety-five children, eighty-one were gassed at the Chelmno death camp, and eight were adopted by German families.