The Dangerous Headlines of the New York Times 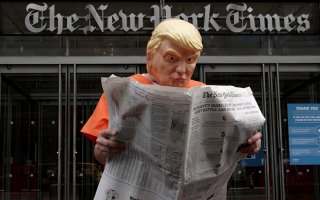 As the nation continues to sort out the aftermath of a deeply divided presidential election, many narratives will emerge and citizens should be guarded and skeptical about them. This is because many in the media simply exaggerate reality. Monolithically ideological stories help polarize various readers into narrow views. It is remarkably irresponsible when outlets like The New York Times ­continues to publish a steady stream of headlines like “Biden Asked Republicans to Give Him a Chance: They’re Not Interested.” This statement is both factually incorrect and helps stoke the flames of the culture wars — exactly what the nation needs to stop doing as it heads into winter during a pandemic.

The GOP is certainly not perfect. While down-ballot gains were made, the Republican Party continues to have a very troubled recent history and contentious leadership that requires a real reckoning. But the Times article relies on no data about actual attitudes toward working with Biden and is instead based on a few seemingly unrepresentative interviews which do not square with data that we have about the views and beliefs of Americans.

In reality, the numbers are quite clear: Biden’s message of unity and the idea of working with others are welcomed by most Americans. In fact, President-elect Joe Biden’s desire to move past the divisiveness that marked the Trump presidency is absolutely in line with the idea that Americans are open to working with others and trying to find the middle ground.

Data from AEI’s Survey Center for American Life — which was collected right before the election — suggests that most Americans believe common ground can be found, though those on partisan extremes are a bit less optimistic.

Specifically, a nationally representative sample of thousands of Americans was asked if it was possible to compromise and find common ground with people who disagree with you. 79 percent of Americans believe that common ground can be found, compared to just 19 percent who feel agreement is simply not possible.

Eighty-four percent of Americans who state that they are ideologically moderate or lean liberal or conservative hold that compromise can be found.

Now, it is the case that the number of Americans who believe that they can find common ground with others slips a bit for those identifying as liberals (79 percent) and conservatives (73 percent), but this does not line up with the piece in The New York Times whatsoever. The appreciable number of conservatives who want to move forward and work collectively for a better future appear to have not been interviewed.

There are certainly conservative Americans who do not want to work with Biden and see him and Democrats as unacceptable, but that does not change the fact that ample numbers of Americans — overwhelming majorities in every ideological group — do want to work together and move the nation forward. These Americans are entering the Biden era with considerable optimism and openness to compromise. This forward thinking is consistent across many facets of the polity, from geographic region to race and ethnicity. There is little generational difference, despite the fact that older cohorts of Americans tend to be more entrenched on preferences compared to younger cohorts. Eighty-one percent of both those in Gen Z and their parents, the Baby Boomers, hold that compromise can be found, and no other cohort is more than a few points off the national average.

These empirical findings are in line with decades of earlier research on the nation’s socio-political attitudes, which have found that most Americans are thoughtful and reasonable, but are regularly subjected to extreme rhetoric and face polarized choices which are the consequence of an extreme and engaged political elite. The percentage of Americans who are interested in continued partisan one-upmanship at the expense of making progress on our most serious problems represent a small slice of the electorate. However, both Democrats and Republicans are somewhat more interested in the other side compromising than their own.

Fortunately, most Americans are open to working together to compromise and find common ground with those they disagree. Donald Trump’s narrative was the antithesis of what deliberative democracy should be and instead opted to demonize others; President Biden’s more hopeful and collective approach may have some real currency. Sadly, pieces which exaggerate headlines and present a limited number of interviews obfuscate this positive reality.

There are many progressives on the left who are totally disillusioned by Biden for being uninspiring and not sufficiently progressive: They were notably absent in the piece. The article, like many narratives, only covered one facet of reality, and this helps set an incorrect and dangerous agenda for the nation; The New York Times and other outlets have to do better for the overwhelming majority of Americans who want to move forward from the Trump era’s divisiveness and believe that it is possible to “stop treating our opponents as enemies.”