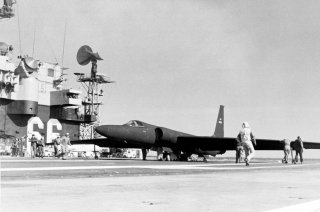 Here's What You Need to Remember: One of the most well-known spy plane encounters happened in the perpetually-contentious South China Sea. A Chinese pilot in a J-8 Finback fighter aircraft, previously known by the U.S. Navy due to his overly aggressive flying style, lost control over his aircraft while intercepting an EP-3 Orion on a SIGINT mission near Hainan Island.

Since the United States entered World War II, the Department of Defense has engaged in the systematic surveillance of other nations by air to glean valuable intelligence on weapons capabilities and military movements. These missions are quite dangerous and often ended in disaster, but the risks endured by these aircrews aboard the Pentagon’s beloved spy planes are often overlooked due to the sensitive nature of their assignments.

Here are five instances from the past that illustrate why these pilots were not flying the friendly skies.

1. A tense shoot-down over the Baltic Sea

As the Iron Curtain descended across Europe, the United States was desperately trying to gather intelligence on Soviet activities across the continent. On April 8th, 1950, a PB4Y-2 Privateer — a modified B-24 Liberator fitted with electronic gear for signals intelligence — left West Germany for the Baltic Sea to gather intel on Soviet naval forces and possibly to monitor early naval missile tests.

The aircraft was intercepted by four Soviet La-11 “Fang” fighters over the Baltic Sea off of the coast of Latvia. According to documentary filmmaker Dirk Pohlmann, the entire sequence of events was pre-planned by the Soviets to attempt to capture the aircraft and crew, or at least shoot the aircraft down if it could not be captured. The aircraft was shot down over the Baltic; none of the ten crewmembers were recovered.

In September 1958, a modified C-130A was shot down over Armenia during signals gathering mission in support of the Armed Forces Security Agency, the predecessor to the modern-day National Security Agency. The C-130 had taken off from Turkey, and the flight plan kept the aircraft on the Turkish side of the border with Armenia; however the C-130 strayed across the border and was promptly intercepted by several Soviet MiG-17 Frescos.

Like most Cold War shootdowns over (or near) Soviet-controlled territory, there exists a vacuum of information on what exactly happened. The Soviets initially claimed that the plane had crashed in Armenia, but later records revealed gun camera footage of a MiG-17 shooting down the C-130, as well as an unearthed 1958 Soviet report detailing the shootdown and recovery operations. None of the 17 crew on board survived.

3. The cold arctic becomes a firestorm in Murmansk

One of the lesser-known Cold War incidents involved an Air Force RB-47 shootdown on a reconnaissance mission off of the northern coast of Russia. Shortly after reaching the Murmansk area, Soviet fighters were scrambled to intercept the aircraft with fatal results: Four of the six crewmen died, and the two surviving crewmen that survived were fished out of the frigid ocean and interrogated in Moscow before their eventual release in January 1961.

The Soviets maintained that the aircraft violated its airspace; however, Oleg Penkovskiy, a spy for the United States, claimed other otherwise., “The U.S. aircraft RB-47 shot down on Khrushchev’s order was not flying over Soviet Territory; it was flying over neutral waters.” When the facts of the shootdown were reported to Khrushchev, he said: “Well done boys, keep them from even flying close.”

Despite the tragic incident, U.S. SIGNIT missions kept flying closer and closer, flying hundreds of near border surveillance flights over the course of the cold war.

After the Korean War, the North Korean government continued to harass and attack ROK and U.S. forces across the peninsula, including the infamous U.S.S. Pueblo incident, where the U.S.S. Pueblo was captured by North Korean forces while operating in international waters.

But overshadowed by the Pueblo affair is is the shootdown of an EC-121 Warning Star (callsign DeepSea 129) over the Sea of Japan on April 15th, 1969.  While performing their SIGINT mission off the coast of North Korea, two North Korea MiG-21 Fishbeds were scrambled on a heading towards the EC-121.

U.S. forces tracked the MiG-21’s, however even with warning, there was nothing that could have been feasibly done to help the doomed Warning Star. Two Delta Dart interceptors were scrambled, but it was too late, as the EC-121 was destroyed by the North Korean MiGs.

One of the most well-known spy plane encounters happened in the perpetually-contentious South China Sea. A Chinese pilot in a J-8 Finback fighter aircraft, previously known by the U.S. Navy due to his overly aggressive flying style, lost control over his aircraft while intercepting an EP-3 Orion on a SIGINT mission near Hainan Island. The J-8 pilot was killed, and the crippled EP-3 was forced to land on Chinese territory.

After attempting to destroy as much of their equipment as possible, the crew surrendered to Chinese authorities and became pawns in a political chess match over the incident. After ten days of political wrangling between the Chinese and U.S. governments, the crew was released unharmed.