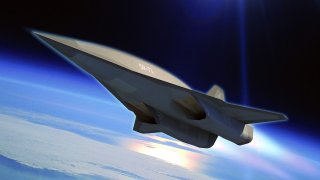 Yesterday, we revealed that the new movie “Top Gun: Maverick” will feature what appears to be a Russian Su-57, but that’s not the only fictional-fighter shown in the movie’s trailers. Another scene seems to show Maverick flying a next-generation fighter dubbed “Darkstar,” according to the movie’s Matchbox toy line.

The Darkstar aircraft shown only briefly at the end of the movie’s trailer is very clearly not based on anything in operation today… but that doesn’t mean it’s without an analogous real-world platform. While we get a quick peek at the underbelly of the streamlined jet in the trailer, Matchbox’s toy line has actually offered us the best view of this aircraft to date.

Based on the shockwave visible as the jet passes overhead in the trailer, it seems likely that this exotic-looking aircraft will introduce hypersonic platforms to the Top Gun universe. Supersonic aircraft (Top Gun’s F-14 Tomcat and F/A-18 Super Hornet) are capable of flying faster than the speed of sound (Mach 1). Hypersonic aircraft travel much faster — in excess of Mach 5, or around 3800 miles per hour.

Russia and China both claim to have hypersonic missiles in operation, with the United States lagging slightly behind. Thus far, no public aviation program has announced plans to build a hypersonic fighter plane, but there are programs already in motion that could certainly produce one.

Lockheed Martin, for instance, has been working on developing a successor to the SR-71 Blackbird, the fastest military aircraft in history, that they claim will be able to fly at speeds even higher than Mach 6. Engine testing has already taken place, and it’s feasible that technology demonstrators for the aircraft may already exist. Interestingly enough… the Darkstar toy bears a striking resemblance to Lockheed’s own artist’s depictions of what the forthcoming SR-72 may look like.

There are some differences between the two — most notably the use of two vertical stabilizer fins on the back of the “Darkstar,” with only one central stabilizer on the SR-72. However, because the Lockheed Martin image is nothing more than a conceptual drawing, the final platform (if it ever comes to fruition) could feasibly have either.

If the Darkstar is indeed a stand-in for the SR-72, it may not be intended as a fighter, but rather as a high speed, high altitude reconnaissance platform like its SR-71 predecessor. However, thanks to highly capable spy satellites, this semi-fictional aircraft may well be armed (in the movie, and in real life).