DARPA Hosts a Man vs a Machine Dogfight 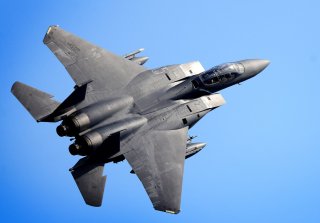 The U.S. Defense Advanced Research Projects Agency (DARPA) has announced that its third round of artificial intelligence dogfighting competitions is slated to begin on August 18, pitting the most advanced AI pilots against one another, and ultimately, a highly trained (and entirely human) F-16 fighter pilot.

Eight teams have been selected to create artificial intelligence (AI) algorithms that are capable of simulating a real dogfight between fighters, referred to as within-visual-range air combat maneuvering more formally. The first two rounds of this competition saw these virtual pilots engage with one another in simulated combat environments in November and again in January. Now, this third round of AI dogfighting will culminate with the hands-down victor taking on a real human fighter pilot in another simulated fight.

While drones have become a staple of America’s air combat power, un-crewed vehicles remain relegated to fairly simple tasks like reconnaissance. Slightly more complex tasks like air strikes are conducted through direct engagement from remote aircraft operators, leaving the majority of combat to human minds, rather than computers.

This approach to combat creates a number of disadvantages for drones, however. The first is signal lag, or the amount of time it takes for a drone’s video and data feeds to reach the operator, followed by the time it takes the operator to make a decision and relay that data back to the drone. While this process can sometimes take only seconds, in a life or death fight at 20,000 feet–seconds can mean everything.

The premise behind DARPA’s AI pilot competition is not just about developing more advanced artificial intelligence, but also bolstering familiarity and even comfort among pilots and the public with the very idea of having an AI wingman in combat. Many fighter pilots, and people in general, have negative pre-existing ideas about artificial intelligence, and DARPA is looking to reframe AI as a powerful tool, rather than a looming threat.

“Regardless of whether the human or machine wins the final dogfight, the AlphaDogfight Trials is all about increasing trust in AI.”

“If the champion AI earns the respect of an F-16 pilot, we’ll have come one step closer to achieving effective human-machine teaming in air combat, which is the goal of the ACE program.”

This competition is a part of DARPA’s broader Air Combat Evolution (ACE) Program, which also focuses on developing trust between human pilots and artificial intelligence, both for use as support aircraft and as a capable means of autopilot. Unlike what you may have seen in movies, however, DARPA’s aim isn’t to take the human pilot out of the fight. Instead, DARPA wants to rely on human pilots to make command decisions for a whole slew of AI-bolstered tools and weapons systems, from drone aircraft to the weapons themselves.

“In a future air domain contested by adversaries, a single human pilot can increase lethality by effectively orchestrating multiple autonomous unmanned platforms from within a manned aircraft. “

“This shifts the human role from single platform operator to mission commander. In particular, ACE aims to deliver a capability that enables a pilot to attend to a broader, more global air command mission while their aircraft and teamed unmanned systems are engaged in individual tactics.”

According to DARPA, the ACE Program has four primary objectives. The upcoming AI dogfight competition falls squarely within the second of these overall goals:

The three day competition will see each of these teams squaring off against five AI pilot systems developed by the Johns Hopkins Applied Physics Lab, before going on to fight one another on the second full day of the competition. On the third day, the best performing four teams will again face one another in a single-elimination tournament. The victor out of those four teams will win the right to take on an Air Force F-16 pilot that has graduated from the branch’s Air Force Weapons School — a program aimed specifically at developing pilot’s combat capabilities.

Eventually, the AI pilot systems developed through these competitions will go on to better inform the future of the ACE Program, leveraging lessons learned through multiple rounds of AI on AI combat, as well as experiences flying against real pilots, to create a system that can better support real pilots in real combat situations.

Programs like Skyborg, which aim to pair manned aircraft with drone wingmen in support, will eventually be able to leverage advanced AI algorithms to make their drone platforms more effective in a wider variety of mission sets. While drones are already capable of reconnaissance and ground engagements, the ACE Program aims to equip these automated systems with the knowledge and decision-making capabilities needed to make split-second decisions with human pilots on the line.

When fully realized, an ACE enabled pilot support system within manned aircraft could help maneuver a fighter out of the way of an incoming missile faster than even the most highly trained pilots could, while allowing the pilot to leverage multiple airborne assets for operational awareness and mission accomplishment. In other words, the effort isn’t to replace pilots, but rather to put them in charge of veritable fleets of aircraft that can operate autonomously after being given orders from the pilot.

Before any such human/AI cooperation can start taking place in the skies, however, DARPA will need to bridge the gap between human and AI capabilities–and that’s where competitions like this month’s dogfight come in.

You can register to watch the whole event unfold live from August 18-20 by following this link.