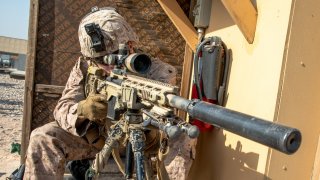 Here's What You Need To Remember: EXACTO technology promises to revolutionize sniping. Snipers can now engage targets more quickly and with greater accuracy at longer ranges, allowing them to do their jobs more safely and efficiently. EXACTO is unaffected by sudden environmental changes, such as a sudden gust of wind. A guided bullet capable of hitting moving targets could be very useful against drones and unmanned aerial vehicles.

Kyle Mizokami is a defense and national-security writer based in San Francisco who has appeared in the  Diplomat, Foreign Policy , War is Boring and the Daily Beast . In 2009, he cofounded the defense and security blog  Japan Security Watch . You can follow him on Twitter: @KyleMizokami. This first appeared several years ago.