Death From Above: Lasers in Space are a Game-changer 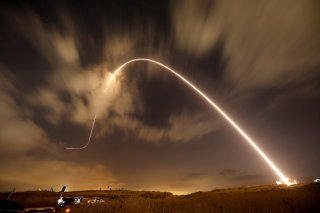 Here's What You Need To Remember: Chemical lasers lost their appeal in the face of potentially more powerful nuclear X-ray lasers, free-electron lasers and particle beams.

From the moment he announced it on national television in March 1983, President Ronald Reagan's signature vision of a space-based ballistic-missile shield provoked excitement and incredulity. The Strategic Defense Initiative (SDI) spent nearly a decade pursuing cosmic lightsabers before the end of the Cold War seemingly ended its purpose.

Costs, technical challenges, and treaty compliance concerns prevented a test of President Reagan's vision during his term. The closest he ever got to Star Wars was an elaborate stage set, a bit of theater just plausible enough to engage his imagination and the Soviets' fears.

Columnist Jack Anderson claimed that President-elect Reagan discussed his missile-defense ideas with Republican senators shortly after the 1980 election. At that time, the most promising directed-energy weapon looked like the high-power chemical laser. A chemical laser creates coherent (laser) light from intense chemical reactions, rather than by stimulating crystals or gases.

Shortly after its founding in 1984, SDI took over DARPA's directed-energy work. SDI's development plan led to a 1990 decision whether to proceed with a 1994 space test.

Chemical lasers lost their appeal in the face of potentially more powerful nuclear X-ray lasers, free-electron lasers and particle beams. But by 1986 it was clear that these exotic technologies were at least a decade away, and the White House wasn't willing to wait that long. The President cherished the hope of personally seeing his vision through.

There was also another reason: SDI chief Lt. Gen. James Abrahamson, a veteran of the Pentagon's early manned space program, believed the reality of a U.S. space-based laser—even just a testbed—would deter the Soviets from deploying countermeasures. Indeed, he hoped that the U.S. intention to test a Death Star would be sufficiently daunting to obviate the need to deploy the weapon at all!

In December of that year, Reagan made a secret decision to go ahead with an all-up Star Wars experiment as soon as possible. A crash program would deliver the first space-based test in 1990: four years earlier than originally planned. The program's classified code name was Zenith Star.

Zenith Star's components—its laser, focusing mirror, targeting and tracking systems—were already in various stages of development. It was to be a massive spacecraft, the size of a semi: eighty feet long, over forty feet in diameter, over forty-three tons’ mass. The weapon would have made up just one part of a multi-layered defense system. Its terrible heat ray could separate decoys from hardened warheads and blow up boosters, while other weapons attacked different targets.

Integration contractor Martin Marietta (now Lockheed Martin) proposed lofting this monster atop a super-sized version of its Titan missile, a four-engine beast appropriately named the Barbarian. Later iterations of the design split Zenith Star into two spacecraft, a laser module and a mirror-targeting module, for launching aboard less brawny boosters.

To instantly generate a megawatt of power, TRW's Alpha chemical laser would mix hydrogen and fluorine gas together much like a liquid-fueled rocket engine does. Light and heat from the the resulting reaction would then be converted into laser light and sent to a primary mirror wider than the one aboard the Hubble Space Telescope. Complex sensors and computers would track targets and aim the weapon's laser beam.

When fired, the Zenith Star weapon would have made a spectacular sight. As incandescent hydrogen fluoride from the turbo-reactor roared out the exhaust ports to form a gigantic gaseous cross, a seven-foot-wide lightsaber blade hotter than the Space Shuttle's engines would spear into the darkness to vaporize metal and detonate rocket fuel thousands of miles away.

Sometime in 1987, President Reagan got his wish to see his vision. At a speech he gave to the workers at Martin Marrieta's Denver plant he stood in front of life-size mock-ups of Zenith Star and its Barbarian booster.

Aerospace historian Scott Lowther has posted some frames from a video taken of the event. Wrapped in gold foil, its exhaust port hatches open and its huge mirror bright, the giant prop emblazoned with the Stars and Stripes suggested how serious Reagan's vision was becoming.

The Zenith Star mockup itself had an interesting history. According to the Encyclopedia Astronautica,

"That model was a refurbished version of a Manned Orbiting Laboratory (MOL) metal mock-up made in the 1960s. When the MOL program was cancelled, the useless bit of tankage had been sold as scrap to a Colorado farmer. It had to be purchased back for the Zenith Star demonstration. It required quite a bit of cleaning and repainting since it had been lived-in for a while by itinerant travellers."

But the impressive mock-up was a long way from the real thing, and not just because it was a prop. By 1989, when the General Accounting Office examined the program, every component was a year or more behind schedule. A skeptical Democratic Congress refused to fully fund a program they thought both impractical and dangerous—dangerous especially to arms-control treaties.

The collapse of the Soviet Union and the end of the Cold War doomed Zenith Star. By 1991, when the Alpha laser was publicly revealed, President Reagan's grand vision had morphed into a smaller enterprise focused on conventional anti-missile missiles. The same challenges bedeviling Zenith Star's development still plague the U.S. missile defense program. America's battlestar sank into obscurity.

But all that money and effort produced more than a movie set. A very great deal about directed-energy weapons was learned; most of it's still classified. In the generation since Zenith Star, advances in computers, optics and power have solved many of the problems daunting the weaponeers of the 1980s.

President George W. Bush's withdrawal from the Anti-Ballistic Missile treaty in 2001 dropped the legal constraints on space weapons tests that challenged Zenith Star. Megawatt-class non-chemical lasers are on the horizon. A lot of real magic can go on behind all the smoke and mirrors.

Steve Weintz, a frequent contributor to many publications such as WarIsBoring, is a writer, filmmaker, artist, animator. This article first appeared several years ago. It is being republished due to reader interest.