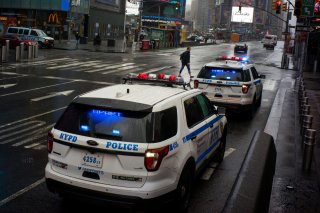 Some protestors are calling for defunding the police in the wake of George Floyd’s death and other incidents of police misconduct. However, just 16 percent of Americans favor cutting police budgets, notes Emily Ekins. More people favor police department reforms such as better training and increased accountability.

That said, police budgets should be examined, particularly since policing costs vary widely across the country. Floridians, for example, should be asking why their police services cost twice as much per capita as police services in Indiana.

There should also be more focus on federal police spending. That includes spending on an alphabet soup of agencies such as the FBI, ATF, DEA, and CBP. This spending has risen much faster than state‐​local police spending in recent decades. That is a big concern if you believe in federalism and decentralized government.

As part of the national income accounts, the Bureau of Economic Analysis publishes data on police spending by the federal and state‐​local governments (Table 3.16). The data are charted below as a percent of GDP from 1960 to 2018. Spending on state‐​local police rose as a share of GDP from 1990 to 2010 but has declined since then. Spending as a share of GDP is about one‐​third higher today than in the 1980s.

Meanwhile, federal police spending has skyrocketed from 0.05 percent of GDP in the 1980s, on average, to 0.26 percent over the past decade. As a share of GDP, federal police spending has quadrupled since the 1980s and doubled since the 1990s. This mainly includes spending on federal functions such as the FBI, but also includes relatively small amounts for grants to state‐​local police agencies.

The BEA does not provide a breakdown of its measure of federal police spending, but you can see the components in federal budget accounts (function 751). There have been large spending increases in Customs and Border Protection, the Drug Enforcement Agency, the Secret Service, the Bureau of Alcohol, Tobacco, Firearms, and Explosives, and other federal policing agencies.