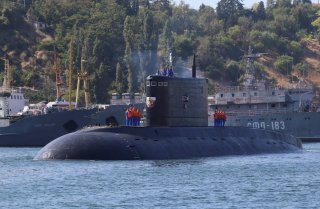 Here's What You Need To Remember: The Russian boat will likely have a more versatile arsenal than its American counterpart, and this could include an array of anti-submarine armaments including high-speed Khishchnik torpedoes, USET-80 universal homing torpedoes and the MTPK-1 universal mine-torpedo anti-sub complex.

Last December Russian state-owned TV aired a segment that may have revealed the first views of a new Russian submarine, reported H. I. Sutton for Forbes.com earlier this year. Eagled-eyed Sutton noted that the segment "showed an official model of a new submarine together with previously known types."

Was that a model of the secret Laika-class, a hunter-killer designed to counter western nuclear-powered submarines? If it was a model of Laika, Sutton suggested it may have been deliberate – a way for the Russians to tease western military analysts without really giving much information about the new class of submarines, which are likely to replace the Russian Navy's current Akula and Sierra classes of attack submarines.

Russia has one of the largest submarine fleets in the world, but it is aging, including nuclear and conventional attack submarines; guided-missile subs armed with cruise missiles; and ballistic missile submarines that are armed with long-range nuclear weapons.

The majority of the boats were commissioned between the 1980s – almost all of its 16 nuclear-powered-attack subs were built for the Soviet Navy – and the 1990s, meaning that older ones are approaching 40 years of service.

Here is where the Laika, named after a breed of Siberian snow dog, could offer much more than a fresh coat of paint for the submarine force. It would, in fact, be Moscow's first "clean sheet nuclear attack sub in nearly 50 years," and while this is the third-new post-Cold War submarine to enter production it could be seen as a true "Russian" as opposed to "Soviet" boat. The Laika has been touted as being a direct response to the U.S. Navy's Virginia-class attack submarine.

Laika, which is being developed at the Malachite Design Bureau in St. Petersburg, will incorporate many new design features that could rival western boats. It will reportedly displace 11,340 metric tons, which is considerably larger than the Virginia­-class's 7,900 metric tons. The Russian boat will also be able to dive to 1,969 feet, far deeper than the speculated maximum depth of 1,600 feet of Virginia.

The Russian boat will likely have a more versatile arsenal than its American counterpart, and this could include an array of anti-submarine armaments including high-speed Khishchnik torpedoes, USET-80 universal homing torpedoes and the MTPK-1 universal mine-torpedo anti-sub complex.

According to reports, Russia will likely replace its aging Akula and Victor-class submarines on a one-to-one basis, so that could mean that Moscow plans to have about a dozen of the new Laika in its fleet. Costs could, however, be an issue – especially since the first boats won't likely begin construction until at least 2023. If the Russian economy flatters, the program could be scaled back.

Then there is the fact that while the Laika is meant to address the current generation of western submarines, analysts such as Sutton have noted even more advanced boats are already in development including the still-secret U.S. Navy's SSN(X) and UK Royal Navy's SSN(R) programs.

Peter Suciu is a Michigan-based writer who has contributed to more than four dozen magazines, newspapers and websites. He is the author of several books on military headgear including A Gallery of Military Headdress, which is available on Amazon.com. This article first appeared two years ago.