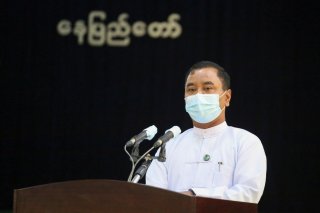 A fortnight after Myanmar’s military coup and the momentum of protest is growing. On February 1 2021, Myanmar’s armed forces, officially known as the Tatmadaw, announced on the military-run TV channel that it had taken control of the country, declaring a year-long state of emergency. Earlier that day, several elected officials were detained, including Myanmar’s de facto civilian leader Aung San Suu Kyi and Myanmar’s president, Win Myint.

In a statement, Aung San Suu Kyi denounced the coup as an attempt to “put the country back under a dictatorship”, urging people “not to accept this, to respond and wholeheartedly to protest against the coup by the military”.

This sudden escalation marked the culmination of weeks of tension between the military and the civilian government over allegations of fraud in November 2020’s elections, in which Suu Kyi’s National League for Democracy (NLD) beat the army-backed Union Solidarity and Development Party.

When, after decades of military rule, the NLD was swept to power in 2015, it looked as if Myanmar was witnessing peace and democracy – at least, as a work in progress. But this was not really the case. The 2008 constitution passed by the military reserved 25% of parliamentary seats for the military and three key portfolios – home affairs, defence and border affairs – to be held by their representatives. So, despite it being a civilian government in name, in practice the Tatmadaw still held considerable power in Myanmar.

But now it has once again taken full control, arguing its power grab was justified by the lack of action taken by the current government over fraudulent election claims. Pledging that new elections would be held in 12 months’ time, military commander-in-chief Min Aung Hlaing was installed as the new leader of Myanmar.

In the days since the coup, thousands have taken to the streets to protest the incarceration of their civilian leader and their president and the installing of a military leader, as well as China’s perceived support for the takeover.

Blow to a fragile democracy

Human Rights Watch, along with many other international organisations and countries, condemned the coup as “a serious blow to democracy”. Importantly, US president Joe Biden’s administration has already called the military takeover in Myanmar a “coup”, a designation that requires the US to cut its foreign assistance to the country.

On February 3, the United Nations Security Council (UNSC) met in an emergency session to discuss the coup. Given China and Russia’s right to veto UNSC resolutions and their long history of backing Myanmar’s junta, it is unlikely the UNSC will be unable to pass a resolution allowing it to act against the coup to preserve peace and security. Also, any international sanctions imposed are likely to fail as China’s burgeoning economic power enables Beijing to resist any external pressures – as it has demonstrated in the past.

With the Tatmadaw’s ability to reassert its control freely without concern about external pressures from the likes of the UN, the question is why has the military orchestrated this coup now?

The reasons appear linked to the perceived erosion of the military’s indirect rule. This erosion has been prompted by several events, such as the banning in 2018 of military commander Min Aung Hlaing and 18 other officials from using social media after they incited ethnic and religious hatred against minority groups such as the Rohingya.

This was followed by a UN investigation that confirmed Min Aung Hlaing would be investigated and prosecuted for genocide over a crackdown on Rohingya Muslims.

These factors, as well as the NLD’s landslide win and the fact that Min Aung Hlaing will this year reach retirement age, put him in a vulnerable position. Given his lack of public support at home and his lack of popularity abroad (the US banned him in 2019), and with no guarantee of immunity from prosecution once he retires, this coup would appear to be the last desperate act of his dying career.

At a time when the country needs unity, peace and stability in the face of a pandemic, the military has instead sown mistrust, fear and chaos. Even at the height of its power – and with the support of the people – it proved incapable of bringing stability or prosperity to Myanmar during its 50-year rule, eventually leading to the popular uprisings of 1988 and 2008. So it is unlikely that the military will prove any better equipped to provide for the country’s needs in its current form.

Given Aung San Suu Kyi’s proven support, evidenced by the overwhelming mandate she received in the most recent two elections, the military might be unable to contain mass protests and maintain control.

At the moment the people’s ability to mobilise is affected by restricted access to internet, telephones and television. But, despite the Tatmadaw’s violent history of protest crackdown, it doesn’t seem to have deterred protest. Thousands have taken to the streets, to be greeted by water cannon, rubber bullets and live rounds, leaving one young woman critically injured with a bullet in her head.

The military’s support appears to be waning. In the past its powers survived because the rank and file within the Tatmadaw didn’t rebel. But this is a new dynamic. A popular leader who won two consecutive elections by overwhelming majority has been thrown into jail. Meanwhile the country’s coronavirus response is dwindling, and civil disobedience and mass protests are brewing.

If this prompts defection of the Tatmadaw’s rank and file then the world may witness a profound tectonic shift in Myanmar’s political landscape, opening the door to the prospect of long-term freedoms, justice and democracy.