Destroying Korea: The Effects of a China-Japan War 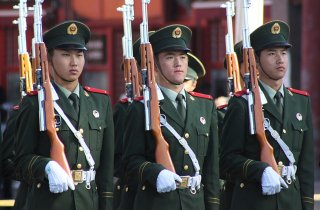 Here's What You Need to Know: It can be fanciful, and even entertaining to think about war scenarios. This article is undoubtedly part both.

China and Japan have gone to war three times since 1894. At the end of the Second World War, with Japan in ruins and under Allied control, it seemed unlikely the two countries would ever fight again.

War between the two countries seemed even more unlikely after the adoption of Japan’s pacifist constitution, which disavows war as an instrument of national policy. At the time, China was a poor, largely agrarian society barely capable of defending itself.

The rise of China over the last thirty years has dispelled the notion that the two powers will never fight again. China’s military, fueled by decades of double-digit budget increases, is now the region’s largest.

At the same time, the two countries are on the opposite side of several regional issues. China and Japan are at loggerheads over the Diaoyu (Senkaku in Japan) Islands, and Japan opposes Chinese expansionism in the South China Sea. Chinese support for North Korea and Russia is also at odds with Japan’s opposition to many of their policies.

There are three ways China and Japan might go to war: directly against one another, a war in which Japan is drawn into conflict as an American ally, and a situation involving North Korea.

The most likely way war could break out between the two powers is through an escalating crisis. China and Japan both station Coast Guard ships in and around the Senkaku Islands. The deployment of minimally-armed Coast Guard vessels by both sides is a useful way of “showing the flag” — and thus backing territorial claims — without involving military forces.

Still, the possibility of escalation exists. One side might — as a gesture of resolve — replace Coast Guard ships with military ones. Such a move would almost certainly be reciprocated by the other side. Flyovers, warning shots, ramming and other shows of force could quickly escalate such a gesture beyond either side’s control.

The deployment of Japanese and Chinese air and naval assets around the Senkaku/Diaoyu Islands could be the most dangerous standoff since the Cuban Missile Crisis, by two powers not particularly experienced in brinksmanship.

Conflict between the two countries might also break out by accident, triggered by non-state actors. Nationalist sentiments for the Senkaku/Diaoyu Islands run deeply in China — and to a lesser extent Japan. In fact, Chinese activists briefly landed on the islands in 2012.

Another, more forceful landing of activists — or even a fishing boat landing on one of the islands in distress — could result in one side forcibly evicting the citizens of the other. The Chinese government may find footage of Japanese police arresting its citizens on territory it claims intolerable, thus prompting Beijing to respond militarily.

The United States and Japan have been close allies for more than fifty years. The two countries are in virtual lockstep on many issues, such as the South China Sea and the need to defend against a North Korean missile attack.

Unlike previous wars in Vietnam and Southeast Asia, today’s hotspots in Asia that are important to the United States are just as important — if not more so — to Japan. The United States and Japan have been presenting a united front in the South and East China Seas. Close political and military cooperation means it is more likely the two will go to war together in Asia rather than separately.

In late April of this year, U.S. Secretary of State John Kerry stated that the U.S. security agreement with Japan “remains ironclad and covers all territories under Japan’s administration, including the Senkaku Islands.” It is clear that any aggressive action by China against the Senkaku/Diaoyu Islands will involve U.S. forces from the outset.

The United States and Japan might also go to war with North Korea. While Japan will likely not be directly involved in any fighting, it would almost certainly extend logistical support to U.S. forces. Such a war could very well draw in China, which has repeatedly stated it would find American forces north of the 38th parallel intolerable.

A situation might even arise in which Japan is not a voluntary belligerent, but gets sucked into war with China anyway. A free and democratic Japan guarantees periodic changes in foreign policy, and not every change will go with the grain of U.S. policy.

Prime Minister Yukio Hatoyama, in office between 2009 and 2010, broke with the United States on China and U.S. bases in Okinawa. If Hatoyama was in office today, it is quite possible he would not back military action against China.

Regardless of the level of Japanese support, American bases such as Kadena, Yokota, Misawa and Sasebo would be essential for the war effort. Under the terms of the Treaty of Mutual Cooperation and Security, the United States would arguably still have the right to use them even without Japanese permission.

In the event of war it is unlikely China would restrain itself from bombing American bases in Japan. Many of these bases are surrounded by villages and towns, and even using precision-guided weapons civilian casualties would be inevitable. Japan would be forced to choose between ejecting U.S. forces — and ending the alliance — or joining them against China.

Finally, conflict on the Korean peninsula could end up involving both China and Japan. North Korea is an unpredictable and violent neighbor that frequently makes violent threats against Japan. It also possesses a large army and nuclear weapons.

A crisis instigated by Pyongyang could act as a catalyst, bringing together China and Japan into the same crisis on opposite ends. China is no fan of the ruling Kim dynasty, but needs a stable North Korea on its southern border. China will be obsessed with preserving North Korean stability, while Japan’s goal will be to not get nuked. China will want to keep foreign troops out, but from the Japanese perspective, the only way to neutralize North Korean nukes may be to put troops in.

Japanese military action on the Korean peninsula would be unacceptable to China, especially if it might include the possibility of Japanese forces stationed in Korea on a permanent basis. If diplomatic efforts to prevent it fail, China may resort to military force to eject Japan.

Another possibility is that Japan decides to preemptively strike North Korea’s nuclear weapons. As North Korea’s military declines, it will be increasingly difficult for the country to defend itself from such strikes. China, fearing successful strikes will topple the Kim government, may decide to actively defend North Korea.

Japanese and Chinese forces could even come to blows in Korea by complete accident.

Whether an invasion of the South by North Korea or a collapse of Kim Jong-un’s regime, war and disorder on the Korean peninsula will almost certainly involve Japan. In 2012, there were 33,846 Japanese nationals living in South Korea, and Japan has repeatedly alluded to the need to be able to evacuate its citizens from “a neighboring country” if the need presents itself.

At 82,000 square miles, the entire Korean peninsula is slightly smaller than the state of Utah. If China were to intervene, the ships and planes of a Japanese evacuation force would operate in close proximity to the People’s Liberation Army. Lacking coordination between the two countries the potential for a deadly accident would be real, and such an accident could spiral relations out of control.

It is unlikely that China and Japan will go to war any time soon. Neither has the slightest intention in being involved in a major war. But wars start all the time, often unintentionally by parties that have far too much to lose.

It can be fanciful, and even entertaining to think about war scenarios. This article is undoubtedly part both. But above all, it can be helpful to the prevention of war. If we can imagine scenarios in which wars might start, we can look at where vital interests intersect and work to avoid them.

This article first appeared in June 2015.