Destruction in Seconds: The Navy's "Project Overmatch" Is Overkill 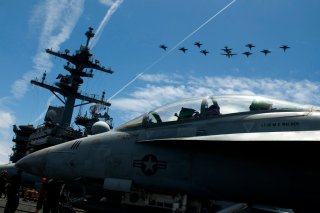 Employing common technical standards, a Modular Open Systems Approach (MOSA) design, and a dispersed base of ground platforms including Patriot Missiles and Sentinel Radars, IBCS seeks to find incoming threats and seamlessly integrate threat track data across a network of defensive combat “nodes” set up to speed up sensor awareness across the force and massively improve the sensor to shooter or interceptor fire control loop. In fact, IBCS has already operated with aerial platforms such as an F-35, so it would not be at all surprising to see ship-based AESA woven into some kind of joint IBCS-like system.

In fact, in July of this year, the U.S. Army successfully engaged a cruise missile target in a highly contested electronic attack environment during a developmental flight test using IBCS.

The test at White Sands Missile Range in New Mexico demonstrated the integration of IBCS and G/ATOR, and incorporated first-time live testing and demonstration of a Joint Track Manager Capability (JTMC).

This provided a bridge between IBCS and the Navy’s Cooperative Engagement Capability (CEC), enabling the integration of G/ATOR track data on the IBCS Integrated Fire Control Network (IFCN) to enable a successful intercept of the cruise missile. The flight test also incorporated two F-35 combat aircraft integrated on the IFCN with on board sensors contributing to the IBCS developed joint composite track used to perform the engagement.

Certainly something along these lines would align with the overall vision of the Pentagon’s critical JADC2 effort.