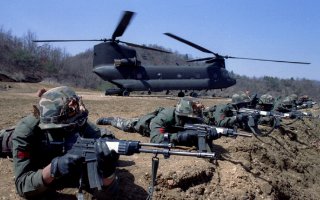 Here's What You Need to Know: It is unlikely that the United States or South Korea would have been caught off-guard had an attack actually occurred.

The stand-off between the United States and the Republic of Korea (South Korea) versus the Democratic People’s Republic of Korea (North Korea) can be traced, in part, back to the events of 1993 to 1994, when concern over North Korea’s nuclear program became front and center. After North Korea refused to cooperate with international inspections and threatened to withdraw from the Non-Proliferation Treaty, the United States and South Korea answered with threats of military action. A confrontation ensued and both sides braced for a resumption of Korean War, which originally began in 1950.

It took an eleventh-hour visit to Pyongyang by former President Jimmy Carter in June 1994 to bring dictator Kim Il-sung back to the negotiating table and defuse what had suddenly become a very dangerous situation. Carter’s diplomacy set the stage for the Agreed Framework, which afforded the North economic aid and the construction of two nuclear power plants for civilian usage in exchange for the cessation of its nuclear weapons program. Despite some successful implementation of the commitment, the Agreed Framework eventually broke down in 2003.

1994 might have been the closest in recent times that the United States, South Korea and North Korea came to resuming the Korean War. But over a decade earlier, the three countries might have come as close – maybe closer – if not for a twist of fate that spared one man’s life.

On October 9, 1983, a bomb exploded at the Martyr’s Mausoleum in Rangoon, the capital of Burma. As part of an official visit to the country, then-Republic of Korea President Chun Doo-hwan had been scheduled to visit the mausoleum to pay respects to Aung San, one of the founders of Burma. The results were devastating – 21 dead, 46 injured. Among the dead were prominent members of the South Korean government, including the deputy prime minister and foreign minister. Fortunately, the South Korean president survived.

Chun Doo-hwan was a career Republic of Korea Army officer who came to power under contentious circumstances. His predecessor was Park Chung-hee, another Army officer and father of the current South Korean President Park Geun-hye. Chung-hee was assassinated on October 26, 1979. During an unclear political situation, Chun and military forces loyal to him executed a successful coup on December 12, 1979. Afterwards, Chun established martial law, squashed dissent, and ruled South Korea through 1987 as a military dictatorship, until the democracy movement brought the country its first truly free elections.

In part, President Chun owed his life to his American advisers. Assassination attempts and terrorism on the part of North Korea was a real threat at the time and concern for the president’s safety prompted the Americans to suggest Chun’s flight route be placed further away from the coasts of China and Vietnam. This caused a delay in his schedule, forcing him to arrive later than the rest of his entourage. North Korean agents confused the arrival of the South Korean ambassador with that of the president, resulting in a premature detonation. Had President Chun ignored the advice of his foreign advisers and maintained the original schedule, it is very likely he would have been present at the time of the explosion and would have been killed or maimed.

The possible implications of Chun’s assassination attempt in Rangoon would not be fully known, however, until over a decade later. Kang Myung-do, son-in-law of then-North Korean Premier Kang Song-san, defected to the South in 1994. As he changed allegiances, he brought with him stories. What a story he had to share about the Rangoon bombing.

Kang told the late professor and writer Don Oberdorfer, who was conducting research for a book, that North Korea had been anticipating civil unrest on the scale of the 1980 Gwangju Uprising, which was pacified through the brute force of the South Korean military. The “massacre,” as it has been described, was a day of infamy for South Korea, and resulted in well over a hundred dead and thousands injured. Kang specifically noted that discharges from the North Korean military had been “slowed or stopped” in preparation for what might occur.

It does not take much knowledge or imagination to reasonably assume that North Korea may very well have intended to invade the South in the event of mass civil unrest. With a nation reeling from its second presidential assassination in four years, the South Korean government in crisis, and the military with its hands full in bringing order to chaos, there would probably be few scenarios better for Pyongyang to exploit in its eternal quest to reunite the peninsula. The North’s Korean People’s Army, which ranked as one of the largest in the world even in 1983, would have enjoyed a significant numerical advantage multiplied by a South Korea in a state of disarray,

Fortunately, it is unlikely that the United States or South Korea would have been caught off-guard had an attack actually occurred. In response to the bombing, the American aircraft carrier USS Carl Vinson and her battle group had their deployment to the Korea region extended and forces along the DMZ were placed on alert. South Korean officials were also warned that North Korea was planning to launch raids using special operations forces had President Chun been assassinated. Had an invasion occurred, however, there is no telling how long the Combined Forces (the forces of the United States and South Korea) could have held out. Depending on when and how hostilities broke out, the United States and South Korea may very well have had to face the first few days or weeks of an attack without significant reinforcement. The early 1980s were a time of rapidly intensifying hostility between East and West; much of the focus was on how to respond to Soviet aggression in Europe. Of course, the United States maintained an arsenal of tactical warheads on the peninsula at the time, which undoubtedly served as an effective deterrent against any North Korean action. The probability of their use would only increase in a situation where the Combined Forces faced defeat.

The “black box” nature of the North Korean regime makes it impossible to prove or disprove any claims made by defectors. However, there is still reason to take at least some claims with a dose of skepticism. For instance, Kang Myung-do also stated when he first defected that North Korea had built five atomic bombs. The emphasis is necessary in light of the fact North Korea’s first nuclear test came over ten years after these claims were made. Coincidentally, this first test occurred on October 9, 2006, 23 years to the day after the 1983 Rangoon bombing. The construction of a nuclear arsenal is a vast undertaking, one that, to this day, North Korea has not shown any indication of having mastered. Little evidence suggests, prior to 2006, that North Korea had ever performed any nuclear tests or attained the ability to manufacture nuclear warheads.

Kang Myung-do reconciled the discrepancy by stating he merely reported what he thought to be true at the time, implying that he himself had little firsthand knowledge of North Korea’s nuclear program. Giving defectors the benefit of the doubt, it is apparent even those within the Communist regime are not privy to all the facts.

There is also reason to doubt whether North Korea would have actually invaded South Korea on its own. In May 1975, Kim Il-sung went to Mao Zedong, seeking the backing of China in an invasion of the South. Mao refused to partake and the North never made an attempt to attack South Korea. For all its bombast, saber-rattling, and threats, hostile activity on the part of North Korea has been largely limited to border and naval skirmishes, as well as terrorism. The modus operandi of the reclusive regime, coupled with the apparent reluctance of its leadership to carry out major attacks independent of outside support, raise questions as to whether the willpower has ever been there on the part of any of the North Korean dictators to reunify the peninsula by force.

Then again, the death or incapacitation of President Chun could easily have created a chaotic situation in South Korea that would have made the job that much easier. Both foresight and hindsight makes it difficult to find another opportunity as inviting as the one that could have presented itself in October 1983.

Chun Doo-hwan’s legacy in leading the Fifth Republic of Korea remains a controversial one, owing to the coup of December 1979 and his handling of the Gwangju uprising. He was convicted in 1996, along with his presidential successor Roh Tae-woo, on several charges, many of them related to the events of 1979 to 1980. Although Chun was initially sentenced to life in prison, he was released the following year after his sentence was commuted, ironically, by the man who vigorously pursued the prosecution of Chun, then-President Kim Young-sam. To add to the irony, President Kim did so on the advice of incoming President Kim Dae-jung, whom Chun Doo-hwan had arrested and sentenced to death in 1980.