Did North Korea Test a Copy Of a Dangerous New Russian Missile? 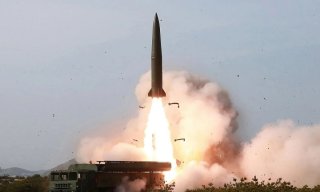 Japan reported that no debris had fallen within its territorial waters or exclusive economic zone (EEC). However, Japanese Prime Minister Yoshihide Suga told reporters that such missile launches still posed a threat to the region and Japan.

The launches also coincided with the Olympic torch relay in Japan.

Japan has held an emergency meeting of its National Security Council, the Kyodo news agency reported. The government in Tokyo voiced its protest to North Korea via diplomatic channels in Beijing.

The United States Pacific Command, which oversees military forces in the Asia-Pacific region, issued a statement and said it was "aware of North Korean missile launches this morning into the East Sea."

"We will continue to monitor the situation and are consulting closely with our allies and partners. This activity highlights the threat that North Korea's illicit weapons program poses to its neighbors and the international community. The U.S. commitment to the defense of the Republic of Korea and Japan remains ironclad," said the spokesman, Navy Capt. Mike Kafka.

"I believe these were short-range ballistic missiles, which we call KN-23," said Yu Koizumi, a senior researcher at the Research Center for Advanced Science and Technology at Tokyo University. "This is the North Korean copy of the missile that is called Iskander in Russia. They can be identified, as it seems to me, by the typical low flight path."

According to South Korean Joint Chiefs of Staff, the missiles reached a maximum altitude of 60km and flew a range of 450 km. That coincides with data from Japan.

"Currently, SK military is closely monitoring related activities in preparation of possible additional launches," the South Korean Joint Chiefs of Staff office said in a statement according to NBC News.

"North Korea has been launching missiles of this type since 2019 and the previous U.S. administration under President Donald Trump did not object to that," noted Yu. "That is why, Pyongyang has now decided after a long break also to begin with the launches of short-range missiles to see the U.S. reaction, as it seems to me."

To date, there has been no comment from the Biden administration either.

The Russian-built 9K720 Iskander-M (NATO code name, SS-26 Stone) has been described as a potential"carrier-killer" by some experts but has been mostly considered to be a land-attack weapon. It is a single-stage ballistic missile, armed with a conventional or nuclear warhead, and a range of 500 kilometers (311 miles). It can be armed with several types of conventional warheads including a cluster munitions warhead, a fuel-air explosive enhanced-blast warhead, a high explosive-fragmentation warhead, an earth penetrator for bunker-busting and an electromagnetic pulse device for anti-radar missions.

The missiles can fly towards their targets at 2,000 kilometers per hour (1,243 miles). They also skirt above the water or ground – at an altitude of only 5 to10 meters (16 to 33 feet), which means hitting it with any sort of sea-based anti-missile defense systems is practically impossible.

If Pyongyang did in fact test launch a copy of the Iskander-M it could give a reason for North Korea's neighbors to be more than a little concerned.