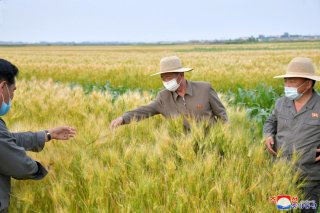 Here's What You Need to Remember: Farmers risk the wrath of the North Korean regime if a cow is found to have died on their watch—and that this has even led to some farmers stealing cows from one another.

North Korea, in recent months, has suffered from a significant shortage of food, and now there’s another report of bad news from that country: thousands of dead livestock.

According to Daily NK, a heat wave has led to the deaths of more than 100,000 livestock as of late July, in South Pyongan Province alone.

The majority of the dead animals are chickens, with 90,000 chickens having perished, along with 7,000 pigs, 2,500 ducks, and 100 cows, the report said. Many others have died in other parts of North Korea. The deaths, the site said, have led to “rising prices for livestock products in the country’s markets.”

The report added that it is necessary to use air conditioning for animals to survive during heat waves, but power shortages in North Korea have rendered that solution impossible.

The Mirror had reported back in March that there had been an "epidemic" of cow deaths, also in South Pyongan Province, with 120 cows reported in the previous month.

“Many cows are dying with the approach of spring,” a source told Daily NK at the time, per the Mirror. “Malnutrition caused seventy-five percent of the cases, with the rest being caused by accidents and disease.”

The March story also said that farmers risk the wrath of the North Korean regime if a cow is found to have died on their watch—and that this has even led to some farmers stealing cows from one another.

“Theft of cows in order to fill the cattle shortage has increased ahead of the farming season, and some people have been caught and punished,” the source said at the time.

Back in 2018, the Dutch publication Agroberichten Buitenland examined the state, at the time, of North Korea’s livestock industry.

“The working cows are raised mainly on collective farms nationwide, and the milk cows are very limited. The livestock policy encourages to have more grass feed animals due to the lack of grain feed and the economic difficulties,” the Dutch piece said. “Therefore more goats, sheep, rabbits are raised than larger livestock animals in North Korea. The stock breed, which accounts for a large portion of the North Korean livestock industry, is pigs, which are raised in most urban and rural families. The rate of raising chickens is the highest among poultry. Duck, goose, and quail are following.”

That piece also noted that North Korea enforces the death penalty for those who slaughter cattle without permission.

“First, beef is not easily found in the market. Cows are bred for the purpose of working, not for eating. Due to the low level of mechanization of farming villages and the lack of fuel for machines, cows account for eighty percent of agricultural power in North Korea. Therefore on farms in North Korea, cows have only a duty to manage for agricultural activities and the right to dispose of them belongs to state agencies. If disposed without the appropriate authority's approval, it could lead even to the death penalty.”