Did a South African Telecoms Company Bribe Iran with Drones? 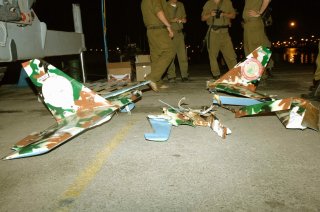 Here's What You Need to Remember: Correlation does not imply causation — but there is no denying at least the visual similarities between Iran’s Ababil 3 and the South African designed/rebadged Denel Seekers that Iran now flies.

Iran flies a wide range of drones and has been doing so since at least the 1980s. Their newest designs are quite advanced — and might have been a bribe from a South African telecommunications company.

War on the Cheap

Iran has a strong interest in finding low-cost solutions to difficult regional problems. Drones are no exception and help level the playing field against strong regional adversaries like Saudi Arabia and Israel. Against global adversaries, like the United States and coalition forces in Iraq, drones have been supplied by Iran to their regional proxy allies in an effort to shape battlefields and political outcomes in the Middle East.

According to Jane’s, there is “strong evidence that Iran has been shipping weapons to its Yemeni allies.” This includes small arms and ammunition, as well as more sophisticated weapons systems including drones. Fighters in Yemen “claim to be producing Qasef-1 unmanned aerial vehicles (UAVs), although they appear very similar - if not identical - to the Iranian Ababil 2 UAV.”

The 2019 missile strike on Saudi Arabia was likely a product of Iranian weapons technology and some Ababil 2s.

Iran’s proxy in Syria and Lebanon, Hezbollah, also has a fleet of Iranian-supplied drones that it has used in Syria.

Back in 2014, a Hezbollah video displayed an early-model Ababil 1. It claimed that Ababil 1s had been used for reconnaissance and had the ability to be armed for attacks (at that time, against Israeli targets. The Ababil 1 is not particularly sophisticated, essentially just a propeller-driven missile.

The sophistication of drones in Yemen has steadily increased. According to The Aviationist, “One type [of drone] associated with Yemen’s Houthis is the Qasef-1 or “Striker-1” drone. A nearly identical variant of the Qasef-1 is fielded by Iran under the name, “Ababil-2” and “Ababil-3”. The Qasef-1 is a propeller-powered “pusher” style UAV with an operational radius reportedly limited to 100 kilometers (62 miles). Its primary role is stated as reconnaissance.”

Perhaps the latest iteration of Iran’s Ababil looks much different than its predecessor generations.

Though it still uses a pusher configuration, the “Ababil 3” is strikingly similar to South Africa’s Denel Seeker — which it may, in fact, be, either a reverse-engineered copy or simply straight-up rebadged.

A lawsuit brought up by a rival telecommunications company, Turkcell, cites an agreement between MTN Group and Iranian partners from 2005: “The cooperation between MTN and Iranian shareholders should be in the line of defensive, security and political cooperation. MTN shall fully support cooperation regarding the aforementioned issues in South Africa.”

Of course, correlation does not imply causation — but there is no denying at least the visual similarities between Iran’s Ababil 3 and the South African designed/rebadged Denel Seekers that Iran now flies.