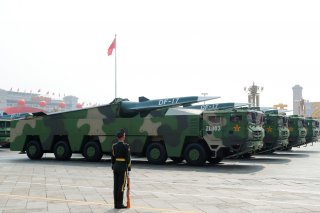 Here’s What You Need to Remember: Now, many next-generation weapons systems are changing the paradigm for weapons development by condensing, eliminating or completing developmental milestones much faster. This approach, driven by the current threat environment, is made possible with rapid prototyping and recent innovations in the realm of digital engineering.

U.S. Army weapons developers often acknowledge that the United States trails both Russia and China in the hypersonic arms race. That is one reason why the service is focused on the planned 2023 arrival of its new Long Range Hypersonic Weapon (LRHW).

The Department of Defense is acting with a sense of urgency due to recent Russian and Chinese hypersonic weapons tests and demonstrations. Its goal is to make sure the military is not outgunned, outranged, or simply overmatched by peer rivals already ready to deploy operational hypersonics.

“The Army decided that we need to move forward rapidly,” Lt. Gen. Neil Thurgood, Director for Hypersonics, Directed Energy, Space and Rapid Acquisition, told an audience at the 2021 Space and Missile Defense Symposium in Huntsville, Alabama.

The LRHW is configured to travel aboard an Air Force C-17 Globemaster III to a forward location, set up for a launch and destroy enemy targets at hypersonic speeds before returning to home base.

This ability with hypersonic missiles will be preceded by a series of what LRHW developers called "joint flight campaigns" involving tests, assessments, and technological refinements of the weapon.

Now, many next-generation weapons systems are changing the paradigm for weapons development by condensing, eliminating or completing developmental milestones much faster. This approach, driven by the current threat environment, is made possible with rapid prototyping and recent innovations in the realm of digital engineering.

Digital engineering allows weapons developers to assess, refine and evaluate key performance parameters related to a new weapon without having to start production because computer simulation has become so precise in its ability to closely replicate or parallel live-fire weapons testing. This has proved valuable for military weapons developers now working on a handful of major systems. Digital engineering, for example, is a key reason why the new Air Force B-21 stealth bomber and Next Generation Air Dominance sixth-generation aircraft are performing so well years ahead of what may have previously been expected.