Dissecting The Myths and Realities of The Battle of Dunkirk 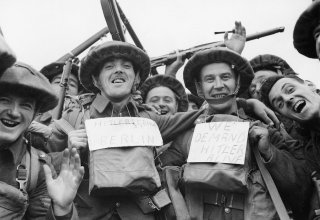 Here's What You Need To Remember: Dunkirk was, by conventional standards, a defeat for the Allies. The British failed to hold ground in France, and lost a great number of men and a huge amount of equipment. But it could have been worse, and by all rights in should have been worse. The Germans could have inflicted much higher casualties on the British and, if the Luftwaffe had performed more effectively in its antishipping role, captured nearly the whole of the force intact.

The seventy-seventh anniversary of the Dunkirk evacuation has already received a great deal of attention, in no doubt due to the pending release of Christopher Nolan’s new film treatment of the battle. For nearly seventy-seven years, the battle has stirred controversy—in one view it’s an example of British courage and gallantry under fire, in another a catastrophic military setback, and in yet another an emblematic example of military and nationalist mythmaking. This article sets the stage for discussion with a description of the battle itself, and of the major debates that emerged in its wake and still stir historians and the public.

On May 10, 1940, the Wehrmacht and Luftwaffe unleashed an offensive against Belgium, the Netherlands, France and Luxembourg. British and French forces on the Belgian border entered the country shortly after the invaders, hoping to break the German momentum and force a stalemate as far away from French industrial centers as possible. The main German effort, however, came in the Ardennes, where the Germans achieved a major breakthrough against shallow, second-rate French units. Within a few days, it became apparent to the Allies that their main forces, including hundreds of thousands of French, Belgian and British troops, could not escape the German encirclement.

Trapped, by May 21 Allied forces had established a defensive perimeter along the English Channel, on the French-Belgian border. The Wehrmacht immediately began reducing the Allied position, which was untenable in the long term. The Allied pocket steadily shrank until May 24, when a three-day Wehrmacht pause (abetted by bad weather that limited the Luftwaffe) gave the Allies time to catch their breath. The offensive resumed on the twenty-seventh, and the Belgians surrendered on the twenty-eighth, leaving only the British and French to fight.

British forces had begun evacuating (mostly dockside onto military transports, rather than the much-heralded civilian boatlift) before the German halt. French and British forces fought bitterly to maintain a perimeter from the twenty-seventh on, falling back by degree against superior German firepower. The last troops escaped on June 2, although fighting continued for another two nights as the Germans closed in. All in all, some 215,000 British and 123,000 French troops fled the pocket, along with a small number of Poles and other nationalities. Very little equipment escaped, however, leaving surviving formations virtually unarmed.

The successful evacuation of British Expeditionary Forces did not meaningfully slow the conquest of France. Shortly after the last British troops left, the Wehrmacht began its final offensive, capturing Paris on June 14. France surrendered on June 22, leaving the United Kingdom the only antagonist directly engaged with Germany. Two other developments would flow from the Allied defeat at Dunkirk; the Anglo-French alliance completely disintegrated (leading to the dreadful destruction of the French fleet at Mers el-Kebir) and the Battle of Britain (the German air assault on the United Kingdom) is held to have begun on July 10, 1940.

Debate has long raged over the reasons for the German pause. Hitler wanted historians to believe that he had ordered German forces to slow their advance so as to convey a message to London that he wanted to reach an accommodation, but little evidence exists to suggest that he was thinking this at the time. More likely, the Wehrmacht and the Luftwaffe simply did not see Dunkirk as a decisive battle worth committing forces to. The BEF and the French Army escaped as defeated forces, not as armies in good order. The Luftwaffe was certainly overly optimistic regarding its ability to stop the evacuation, but it also did not commit the forces necessary to prevent the British escape.

It is probably not surprising that such a devastating defeat would immediately lead to bitterness and recrimination on the Allied side. The French and the British blamed each other, and the Belgians, for the situation that led to the Dunkirk evacuation. In reality, uncertain commitments, poor communication and limited staff work in anticipation of the German offensive made the Allied position extremely vulnerable. Although both French and British troops escaped, the overall numbers heavily favored the latter. This caused tension at the time, and later led many French to believe that the British escape was built upon a betrayal. It was hardly lost on either side that France would not likely continue the war, and thus that its soldiers were not as valuable to the Allied cause.

The Legacy of Dunkirk

Dunkirk was, by conventional standards, a defeat for the Allies. The British failed to hold ground in France, and lost a great number of men and a huge amount of equipment. But it could have been worse, and by all rights in should have been worse. The Germans could have inflicted much higher casualties on the British and, if the Luftwaffe had performed more effectively in its antishipping role, captured nearly the whole of the force intact. But either way, these losses would have had little direct effect on the ensuing Battle of Britain; the Germans never seriously threatened an amphibious assault that could have forced combat on shredded British units.

The myth of Dunkirk (and especially of the fleet of small civilian boats that supposedly rescued the British Army) undoubtedly stiffened British resistance. However, Dunkirk was only a prelude to the Battle of Britain, which would come to serve as the central legitimating myth for the British warmaking effort (and indeed for much of postwar Britain’s foreign and defense policy). Without Dunkirk, the British still win the Battle of Britain, and the war continues.

But this merely means that the myths of Dunkirk have overstated the importance of the battle, not that the battle itself wasn’t important. 215,000 men of the BEF contingent itself would certainly have suffered over the course of the war in German POW camps, just as captured French soldiers suffered. And undoubtedly, the British Army would have faced greater difficulties reconstructing itself for the 1944 invasion of Europe if it had lost the trained, experienced BEF cadre. The attractions of myth-busting notwithstanding, the Battle of Dunkirk remains an magnificent example of maintaining discipline and clear-headedness even in the face of utter defeat, and the heroism of the soldiers, sailors, and civilians who participated in the evacuation should not be forgotten.

This piece first appeared in May 2017 and is being republished due to reader interest.