Do or Dye: How Food Coloring Can Help in the Fight Against COVID-19 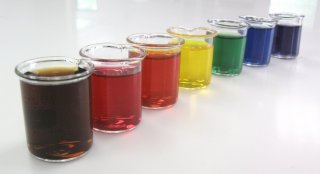 The big idea: Our biomedical engineering lab has developed a way to potentially neutralize viruses lingering in the air using aerosols of FDA-approved food coloring dyes. Aerosols are tiny bits of solid or liquid matter suspended in air.

Our idea was inspired by photodynamic therapy, which is a medical treatment, including for certain types of cancer. Photodynamic therapy uses a photosensitizer, a chemical that reacts with oxygen in the presence of light, to produce oxygen free radicals. These radicals are highly reactive, meaning they trigger other chemical reactions, including ones that kill harmful pathogens.

Instead of using expensive medical photosensitizers, we have identified several FDA-approved food coloring dyes that can be used to generate free radicals in visible light. We use ultrasound to generate small aerosols containing the food coloring so that the dyes can float and linger in the air. The aerosols are barely visible, and their small size and short lifespan in light means they don’t stain surfaces.

We used this technique to produce a device, Photodynamic Airborne Cleaner, that disinfects pathogens floating in the air. To the best of our knowledge, this is the first-of-its-kind photodynamic therapy aerosol generator for airborne disinfection.

Viruses and bacteria are often transmitted through the air. A person infected with SARS-CoV-2, the virus that causes COVID-19, who coughs or sneezes produces virus-containing droplets and aerosols that float in the air and can cause infection.

Due to this risk, all kinds of indoor gatherings are now limited. It is critical to be able to disinfect and sanitize large volumes of indoor air where many people are present to reduce the chances of transmission.

What other research is being done in this field

Photodynamic therapy was first demonstrated as a means of fighting bacterial infection. Oxygen free radicals, specifically singlet oxygen, can also inactivate viruses by damaging the nucleic acids, proteins and lipids that they are composed of. In particular, singlet oxygen is effective at breaking down the lipid envelopes that form protective shells around many viruses. Most of the viruses that are harmful to humans, including SARS-CoV-2, have these envelopes.

Several other disinfection techniques are available, for example aerosolized hydrogen peroxide, hydrogen peroxide vapor, ozone, steam and UV-C or “deep UV” illumination. However, these are more appropriate for disinfecting surfaces than disabling pathogens floating in the air. Also, they can be hazardous to humans. For example, deep UV is commonly used as a disinfectant, but is carcinogenic.

We are preparing to collaborate with a federal research team to evaluate the effectiveness of our Photodynamic Airborne Cleaner against airborne transmission of SARS-CoV-2.

Aerosols of FDA-approved food coloring dyes and their singlet oxygen generation do not last for a long time. These dye aerosols break down in light, and singlet oxygen is not generated without light. Nevertheless, even though the food coloring is FDA-approved for consumption, it’s necessary to test the safety of potential inhalation and oral intake.