Does the Navy’s Billion-Dollar Zumwalt-Class Destroyer Have a Purpose? 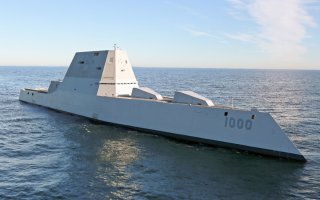 Here's What You Need to Remember: Refitting the Zumwalts with hypersonic missiles smartly matches a relatively high-end offensive capability to a unique, limited volume platform, one that will be able to conduct fast-hitting long-distance attacks at reduced risk of being detected and struck by retaliatory fires.

San Diego hosts three of the U.S. Navy’s most striking warships: the USS Zumwalt, Michael Monsoor, and the soon-to-be-commissioned Lyndon B. Johnson. From their distinctive tumblehome hulls which are narrower above the waterline, futuristic flush surfaces designed for radar stealth, and sheer size—nearly twice the displacement of a workhorse Arleigh Burke-class destroyer at 17,500 tons—one might naturally assume them be the most capable surface combatants on the planet.

Unfortunately, that is far from the case as explained in this earlier profile piece. The Zumwalts, or DDG-1000s, were designed around two rapid-firing long-range Advanced Gun Systems used to bombard coastal targets—already in retrospect a dubious concept. But the hi-tech ammunition proved so expensive—$800,000 per shell!—that it was canceled, leaving the Zumwalts’ guns without ammunition to fire.

Though the $4.2 billion vessels were not left toothless thanks to their 80 missile-launching cells, they needed a purpose to justify the high costs of maintaining a small fleet of unique, oversized ships, or faced the specter of early retirement.

Over the years, the Navy considered replacing the Zumwalts’ guns with electromagnetic rail guns (which were also canceled) or repurposing them as roving anti-ship platforms. But the 2022 defense budget reveals the Navy has finally found a use for the stealth ships commensurate to their size: as launch platforms for hypersonic land-attack missiles.

The Navy initially announced its hypersonic missile, called the Conventional Prompt Strike, would debut on Virginia-class Block V attack submarines by 2028. The first of around 10 Block Vs were ordered late in 2019 and have yet to begin construction. Eventually, the missile will also supposedly be deployed on Arleigh-Burke destroyers, but how remains unclear as the CPS is too large for their vertical launch systems.

Then late in 2020, the Navy indicated it wanted to also deploy CPS missiles on its four huge Ohio-class SSGN cruise missile submarines by 2025 as an interim capability by swapping out Multiple All-up-round Containers designed to hold seven Tomahawk cruise missiles with ones that can carry three CPS missiles instead.

It’s unclear whether that plan stands because in 2021 the Chief of Naval Operations Mike Gilday announced hypersonic weapons would instead debut by 2025 on the three Zumwalts.

Defense Daily reports that included in the $112.6 million the Navy is requesting for DDG-1000s in the 2022 defense budget is funding to remove the useless guns to free up space and weight for launch canisters for 34.5” diameter CPS missiles.

That includes installing a launch control system and insulation against the shock of a launch. So as not to fry the ship, the large missiles will be cold-launched, using pressurized gas to eject from the launch tube, only igniting their two-stage solid-fuel rocket booster upon clearing the ship.

The CPS missile is actually a product of a joint program with the Army called the Common-Hypersonic Glide Body. The Army’s version, the Long Range Hypersonic Weapon, will be truck-mounted and is claimed to have a range in excess of 1,700 miles and a peak velocity of Mach 17.

A successful flight test of C-HGB was conducted over the Pacific in May 2020 (which you can see here). The Army Secretary claimed the weapon landed within six inches of the designated target, likely an islet located in the Kwajalein Atoll.

The nearly meter-wide missile is effectively a rocket-boosted container for a hypersonic glide vehicle released while just above the atmosphere. The glider skips along the denser atmospheric particles, potentially maneuvering along the way to evade or confuse missile defense radars and interceptors, before plummeting down on its target.

Such boost-glide weapons are not necessarily faster than traditional hi-arcing ballistic missiles, nor stealthier than low-flying cruise missiles, because they are slowed more by atmospheric friction than the former, and that friction makes them much hotter than the latter.

However, their trajectories are less predictable because of their superior ability to maneuver, and they remain faster than subsonic cruise missiles like the Tomahawk the Navy has traditionally relied upon for long-range strikes which could hours to reach targets at maximum range.

That means hypersonic weapons may be preferred for hitting distant time-critical targets, like a ballistic missile being prepped for launch or aircraft refueling and rearming at an airbase.

With hindsight, the Zumwalts seem ideal candidates for CPS because they have the space to spare, at least once the guns are removed. Furthermore, the DDG-1000s combines the advantages of being more visible than a submarine for the purposes of political signaling and conventional deterrence in a non-war context—while remaining harder to detect and attack than other surface warship should war actually break out.

Furthermore, sea-based intermediate-range missiles may prove more deployable than land-based batteries because they won’t require politically difficult authorization from an allied government to be deployed on foreign soil.

This is spelled out in the Navy’s funding request: “When combined with the low observable characteristics of the Zumwalt platform, the funds provide a compelling strike capability from a platform designed to complicate an adversaries targeting problem.”

While maritime radar stealth doesn’t’ match the extremes discretion achieved by modern stealth aircraft or submarines, the Zumwalt’s reduced radar cross-section still reduces the distances at which it is detected, and makes it appear like a much smaller ship.

As detecting and tracking even non-stealth warships across vast oceans is already no trivial matter, the Zumwalt’s stealth characteristics mitigate the risks of coming under deadly anti-ship missile attack. That’s particularly important because China operates land-based DF-21D and DF-26B anti-ship ballistic missiles with ranges of up to 1,100 and over 2,000 miles respectively—the latter seemingly exceeding the range of the CPS missile.

Further on the horizon, it’s possible the CPS (and its land-based LRHW counterpart) may be evolved into an anti-ship capable weapon by being fitted with a seeker which can home in on moving targets. That could make the CPS a more mobile sea-based equivalent to China’s anti-ship ballistic missiles, though with a different flight profile.

The CPS missiles on a Zumwalt would nonetheless effectively remain a premium, low-volume capability reserved for use against the highest value and/or most time-critical targets compared to Tomahawk cruise missiles and shorter-range anti-ship missiles, up to 96 of which can theoretically be loaded into an Arleigh Burke-class destroyer.

Furthermore, once its twelve missiles are launched, a Zumwalt would need to replenish at port. Indeed, hi-tailing it back to safe waters could be wise as the missile launches may be detected by radar or satellite-based infrared sensors and used to locate the launch platform’s position.

Nonetheless, refitting the Zumwalts with hypersonic missiles smartly matches a relatively high-end offensive capability to a unique, limited volume platform, one that will be able to conduct fast-hitting long-distance attacks at reduced risk of being detected and struck by retaliatory fires.

Sébastien Roblin writes on the technical, historical, and political aspects of international security and conflict for publications including The National Interest, NBC News, Forbes.com and War is Boring. He holds a Master’s degree from Georgetown University and served with the Peace Corps in China. You can follow his articles on Twitter. This article is being republished due to reader interest.