Does the United States Spy on Chinese Bases in the South China Sea? 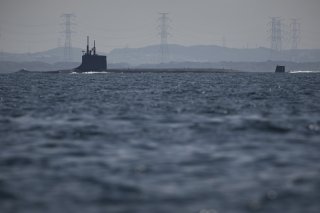 Here's What to Remember: The exact nature of Connecticut’s mission may not be publicly revealed, but it’s possible the submarine was gathering information on Chinese equipment or units when its accident occurred near the South China Sea.

The exact nature of last week’s collision in which a Navy Seawolf-class submarine “struck an object” is still unclear. What was hit? Perhaps of even greater significance, what mission led one of the Navy’s most capable submarines to cruise waters in or around the South China Sea?

“The Seawolf-class fast-attack submarine USS Connecticut (SSN 22) struck an object while submerged on the afternoon of Oct. 2, while operating in international waters in the Indo-Pacific region,” a press release from the U.S. Pacific Fleet said. “The safety of the crew remains the Navy’s top priority. There are no life-threatening injuries.”

The incident is still under investigation. However, the collision does draw attention to the clandestine reconnaissance missions sometimes undertaken by attack submarines. These missions usually receive little attention despite playing their outsized importance.

Enemy movements, port activities, and land-based weapons in coastal or island areas are difficult for surface ships to access without giving away their position on surveillance missions. Surface ships or their aircraft could be more detectable to radar and sensors when compared to a stealthy submarine. At the same time, improved undersea navigation and detection technology, new sonar equipment, and other sensors allow operations in littoral waters where enemy mines, small boats, and other assets often operate.

The concept of further developing undersea attack submarines for spy missions was highlighted by the Navy in public documents several years ago. Technological innovations with the Virginia-class submarines, which included a range of “quieting” improvements likely informed further evolution of submarines for use as spying assets.

The Navy published the Commander’s Intent for the United States Submarine Force, in 2018. It discusses the role of submarines in espionage and surveillance.

We are uniquely capable of, and often best employed in, stealthy, clandestine and independent operations.

We exploit the advantages of undersea concealment which allow us to:

By leveraging an ability to operate more quietly and in closer proximity to enemy shorelines and areas of high interest, attack submarines can identify and threaten enemy surface ships. They can reconnoiter regions and enemy forces that would be unable to be approached by surface ships in hostile areas.

The exact nature of Connecticut’s mission may not be publicly revealed, but it’s possible the submarine was gathering information on Chinese equipment or units when its accident occurred near the South China Sea.