Does the U.S. Face a Debt Meltdown? 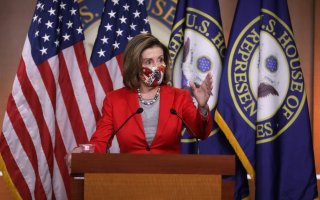 A new report from the nonpartisan Congressional Budget Office (CBO) projects a $2.3 trillion budget deficit in 2021. This is $900 billion less than the 2020 deficit, but as a percentage of GDP it is still the second largest since World War II. In addition, the report states that the national debt will reach 102 percent of GDP this year and rise to 107 percent by 2031 – an all‐​time record.

Critically, this report does not account for the $1.9 trillion stimulus package that President Biden is proposing, which will further worsen the U.S. fiscal imbalance. The CBO report does project shrinking deficits in the next several years, with the New York Times reporting:

The 2021 deficit projection has grown compared to the office’s September forecasts, largely as a result of a $900 billion economic aid bill Congress passed in December. But projected deficits for the ensuing several years have shrunk by even more as a result of faster‐​than‐​expected economic growth, which is projected to increase tax and other federal revenue.

This rosy outlook, however, is not warranted. Focusing on the short‐​term is tempting, but the crucial issue is the long‐​term fiscal imbalance. Research finds:

The current fiscal path is unsustainable. The primary drivers of America’s growing debt burden are Medicare and Medicaid, which are projected to grow faster than GDP indefinitely. Social Security is projected to grow faster than GDP for at least the next 20 years. Thus, stabilizing the debt‐​to‐​GDP ratio requires lowering the growth rate of spending on these programs. The recent wave of COVID-19 spending has pushed the debt‐​to‐​GDP level past 100 percent for the first time in multiple generations. In the long run, however, the pandemic will not dramatically alter the debt burden’s path. Rather than focusing on cutting spending for COVID-19 relief, Congress should focus on curbing the growth in mandatory entitlement spending.

Predicting when the U.S. will have a fiscal meltdown – if we fail to slow entitlement growth – is tricky. Many countries have been on what appeared to be unsustainable paths for decades before their financial and fiscal situations collapsed. But that does not mean they escaped eventual reckoning, nor that the U.S. should risk the same fate.