Don’t Count It Out: The F-15 Eagle Still Has a Role to Play 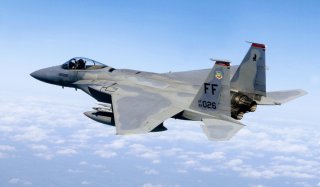 Here's What You Need to Remember: Although the F-22 Raptor is considered by many to be the best air superiority technology available, there simply aren’t enough F-22 jets to fulfill USAF’s robust rotation commitments across Pacific, European, and Middle-Eastern theaters. This is why USAF’s fleet of around two hundred F-15C/D’s remains a core component of American air superiority capabilities.