Donald Trump Didn't Come Up with the Space Force Idea: It Has Been Around Since the 1980s. 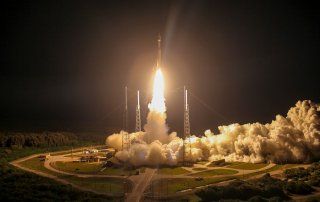 Last year, President Trump made headlines the world over with the announcement of a proposed space-specific branch of the U.S. Armed Forces. While the administration and logistics of such an endeavor remain the subject of debate, the fact that the United States has a vested interest in developing both defensive and offensive capabilities in orbit is perhaps better understood by the general public today than it has been at any time in history. With modern warfare so reliant on satellite-based technologies, the nation that dominates the skies above will always maintain the digital high ground.

While that concept is only recently seeping its way into common conversation here in the United States, it’s always been present behind closed doors at the Pentagon. The very establishment of NASA, less than a year after the launch of Sputnik and staffed in large part by scientists and researchers who had previously developed missile technologies for the U.S. military, was (at least in part) a strategic military decision dressed up in good PR. President Kennedy’s famed announcement that Americans would reach the Moon by the close of the 1960s wasn’t lofty American optimism: it was a directive rooted deeply in geopolitics and concerns about the spread of communism. The Soviet Union’s early lead in the space race was not only a black eye for America, it was seen by many as proof positive that the Soviet communist model was not only working, it was out-innovating American capitalism. Winning the space race, then, became about more than national pride. It was about the efficacy of economic ideologies in an era when global norms were at stake.

Related: THE NEW SPACE FORCE FLAG LOOKS LIKE IT’S RIGHT OUT OF STAR TREK. HERE’S WHY

Even for Americans who are ready and willing to embrace the idea that national security concerns helped fuel America’s fervor for space programs in the 1950s and ’60s, most tend to think of the space race as a competition with an end date: July 20, 1969. That’s the day Apollo 11 landed on the Moon, accomplishing a feat the Soviets could not match and securing the “ultimate high ground” for American interests. The truth of the matter is, however, the Moon landing’s strategic value was largely about perceptions regarding America, the Soviet Union, and their respective economic and political ideologies. The real space race, as it pertains to military endeavors, has always been primarily about orbital assets, and that race continues to this day.

With Russian “inspector” satellites largely believed to be orbital weapons platforms, and China now beginning to field its own maneuverable, unmanned orbital platforms that can also be used to disrupt other nation’s satellite capabilities, it’s clear today the United States has fallen behind when it comes to finding ways to fight future wars in space (at least as far as non-classified programs go). Despite harsh statements made by both Russian and Chinese government officials regarding America’s burgeoning Space Force, each of those nations has already maintained space-based branches of their own for years. In fact, even America once had a secretive Department of Defense (DoD) space program complete with its own military astronauts, a $3.3 billion California-based spaceport meant for secretive space shuttle launches into polar orbit, and more.

The endeavor was called the Manned Spaceflight Engineer Program, and although it hasn’t gotten much attention in the years since, the Pentagon invested billions of dollars into it throughout the 1970s and ’80s. A secret group of 32 men was selected from the U.S. Air Force and trained as astronauts completely independently of their peers at NASA. The specialized training revolved around deploying classified payloads and conducting other secretive activities in orbit using America’s space shuttle as the primary orbital platform. In fact, at one time, the DoD intended to fly more shuttle flights per year than NASA.

Between these two agencies, it really was a shotgun marriage,” said retired Air Force Col. Gary Payton, who served as Deputy Undersecretary of the Air Force for Space Programs until his retirement in July, 2010.

“NASA thought of us as a bunch of snotty-nosed kids, outsiders, almost guests…nothing more than engineers or scientists who tended one particular satellite or experiment, and typically flew just once. We, on the other hand, thought our job was to help bridge the gulf between the military and civilian space agencies.”

At one point, the Air Force’s Manned Spaceflight Engineer Program had 134 military officers and civilian experts assigned to it, manning the California launch complex as well as the Pentagon’s own version of mission control in Colorado. A third facility in Los Angeles housed the program’s 32 military astronauts, who entered the program through three separate astronaut classes held in 1979, 1982, and 1985.

It really invested a lot in bright, talented, aggressive, young officers to get in there, roll up their shirtsleeves and to really fight for the program. And frankly, there was so much. It wasn’t just about the technical interfaces,” said another Manned Spaceflight Engineer Program alum, retired Lt. Gen. Mike Hamel. “The operational planning, the command, the data lines and flight rules, the procedures, and the contingency operations. This is really where most of us ended up cutting our teeth.”

While the plan was to launch DoD-specific shuttle missions from different launch facilities around the country, the first steps were to integrate military-trained astronauts (called Manned Spaceflight Engineers or MSEs) into NASA shuttle missions to help them garner important operational experience. On January 24, 1985, Payton (a major at the time) was the first military-trained astronaut to join a NASA crew aboard the space shuttle for a trip into orbit. Publicly, Payton’s name and role were both played down in the press. Privately, he helped to deploy a classified payload that the government acknowledged in the late ’80s was an electronic intelligence-gathering platform.

In October of the same year, Maj. William A. Pailes became the second airman-astronaut to reach space with a NASA crew, but officially, no one from the program would ever attain orbit again. Just a few months later, in January of 1986, the Challenger disaster would change the entire course of the program.

At its peak, the Pentagon’s space shuttle program was supposed to manage as many as 12 to 14 shuttle missions per year, far more than NASA was equipped to handle. It would have provided America with the most robust, redundant, and advanced orbital constellation of assets the world had ever seen. Many of those missions were intended for polar orbits, which would allow for greater surveillance capabilities over the equatorial orbits allowed from the Kennedy Space Center in Florida.

But within a year of the Challenger disaster, it was over.

”By 1987, it was all gone,” said William J. Baugh, director of public affairs for the Air Force Second Space Wing at Falcon Air Force Base in Colorado. Baugh told the New York Times, ”By that time, Challenger had its problem, and we decided to get out of the shuttle business.”

The Air Force was spooked by the Challenger disaster, bolstering internal voices of descent that had already been championing a transition to deploying national defense satellites via unmanned rockets. It was safer and, based on the ever-growing costs of each space shuttle launch, more cost-effective. However, surrendering the ability to put personnel into orbit dramatically reduced the proposed capabilities of the DoD in space. It also meant finding a new use for the $3.2 billion launch complex on which construction was nearing completion.

Air Force Public Affairs wrote of the decision in 2017:

As NASA struggled for nearly two years to return to flight, the Air Force and NRO ramped up their plans to move critical national security payloads back to unmanned, expendable rockets. The only satellites that would still be launched on the shuttle were those that couldn’t be shifted to the new Titan IV. When the military turned away from the shuttle, MSEs like Watterson and Joseph, originally an alternate for STS-28, suddenly lost their flights.

Classified shuttle missions involving military personnel continued for years to come, but the loss of Challenger (and potentially the realization that the Air Force would have to explain the loss of its own secretive crew if something similar were to happen on a mission) seemed to sour the Pentagon’s interest in what some have claimed was already an unpopular program.

“It’s disappointing,” Maj. Frank M. DeArmand, an MSA who never got to fly, told the New York Times in 1989. ”We all had the excitement and expectation of flying on the shuttle. But I’m not bitter. It was the right decision.”