Donald Trump Just Banned Evictions. It Might Be Illegal. 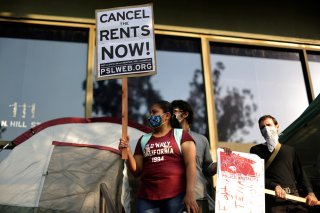 Yesterday the Trump administration published an emergency edict purporting to ban a wide range of residential evictions for nonpayment of rent nationwide through the end of the year (and well past Election Day). [AP, Reuters] Under what claimed authority, you may ask, and if so, how constitutional is that claimed authority?

It’s one thing for the feds to attach strings regarding evictions to housing they’re involved with financially. That has already been part of the federal response to the COVID-19 pandemic. This new measure, far broader, dispenses with that nexus.

State governments have also imposed eviction moratoria related to the pandemic, often employing levers at their disposal that the federal government does not have, such as some discretion over the operation of their courts (state and local courts handle nearly all evictions). Property owners have already sued against some of these eviction moratoria in states like Massachusetts, Arizona, and New York (note that in the last‐​named, the state has won so far).

But even if the states prevail against these challenges, that doesn’t mean the federal government possesses any parallel power. Standard readings of the Constitution accord states a broad, inherent police power which has long been recognized to include sweeping health powers. The federal government by contrast is one of enumerated powers — to regulate interstate commerce, for instance. Maybe your mayor can order you to mask up. That doesn’t mean the U.S. president can! Not only does he need to point to an authorizing law passed by Congress — which may or may not be there — but that law must also rest on an enumerated power.

In this case the edict issues from the Centers for Disease Control — you were expecting maybe Housing or Treasury? — and invokes Section 361 of the Public Health Service Act, 42 U.S. Code § 264 – “Regulations to control communicable diseases”. You can read it here. The relevant provision authorizes the Centers for Disease Control, carrying forward powers originally held by the Surgeon General,

to make and enforce such regulations as in his judgment are necessary to prevent the introduction, transmission, or spread of communicable diseases from foreign countries into the States or possessions, or from one State or possession into any other State or possession. For purposes of carrying out and enforcing such regulations, the Surgeon General may provide for such inspection, fumigation, disinfection, sanitation, pest extermination, destruction of animals or articles found to be so infected or contaminated as to be sources of dangerous infection to human beings, and other measures, as in his judgment may be necessary.

As colleague Julian Sanchez notes, “This is an extraordinary assertion of federal authority by executive fiat based on an incredibly tenuous link to an underlying statutory authority.” Among its implementing measures, this short enactment enumerates steps such as quarantine of travelers and persons believed infected, fumigation or destruction of goods exposed to contagion, and closely related measures. Nothing here suggests that, say, “power to override the tenancy contracts of all U.S. inhabitants” is implied. As the late Justice Scalia said, Congress as lawgiver does not hide elephants in mouseholes. If it confers peremptory power over the entire U.S. economy to a functionary in the federal organizational chart, it does not do so by inadvertence amid a list of authorities to inspect arriving agricultural goods for pests and intercept the travel between states of persons with contagious disease.

The practical consequences loom large. State moratoria have already inflicted grave losses on many individual owners of rental properties. A federal ban through year end would ensure what would amount to confiscatory outcomes, such as foreclosure and loss of properties, for some landlords that did no wrong.

One bit of background that reporting sometimes omits: rents have sagged during the pandemic in sought‐​after cities, especially for other than the largest units. So for owners there, you can’t charge as much, *and* your tenants might not have to pay anyway.

What will happen in the inevitable court challenge? You might imagine that the Takings Clause would serve to repel this sort of attack on property rights, but as many regular Cato readers know, the federal courts have been brutally unsympathetic to property owners facing confiscatory rent control schemes in states like New York and California. See these two filings for examples of Cato’s long uphill battle against this state of law.

On the other hand, the Supreme Court has been more open to striking down overreaching federal edicts when 1) the feds have overstepped the limits of the interstate commerce power or other enumerated powers; 2) the grounding in statutory authority is not clear; or 3) the rules of administrative law have been overstepped. Here, the chances of stopping it must be accounted brighter.

I’ll leave the last word to commentator Sean Trende on Twitter: “I was told that if I voted for Clinton there would be massive executive power grabs from which the constitutional order might never recover.”