Donald Trump Promised to Roll Back Obama's Policies. Was He Successful? 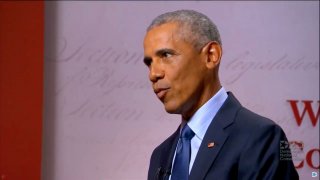 Trump’s decision to withdraw the US from the Paris Climate Agreement, which Obama’s administration signed in 2015, is often held up as an example of how he rolled back Obama’s legacy. But other reforms showed with clarity the push-pull nature of policy from the Obama to Trump administrations.

The Clean Power Plan (CPP), which set out to curb US greenhouse gas emissions, is one such story. Unveiled by Obama in 2015, the CPP was groundbreaking in a range of ways. It demonstrated that the world’s leading superpower acknowledged the existence of human-made climate change, and offered an initiative to reduce carbon emissions back to 2005 levels by 2030. A significant step forward in itself, the CPP looked to set a bar for other nations and give a warning to big polluters. So far, so environmentally good.

But the CPP quickly caused consternation with governors in dozens of states, who lost no time in taking legal action against a plan they viewed as a serious threat to the economy. By early 2016, 24 states were challenging the CPP in court, resulting in a Supreme Court decision to issue a judicial stay on Obama’s plan.

When Trump arrived in the White House, the path to undermining the plan was already paved. In March 2017, he signed an executive order requesting that the Environmental Protection Agency (EPA) carry out a review of the CPP. By this time, the agency was headed by former Oklahoma attorney general Scott Pruitt, known for his rejection of the climate crisis as a man-made phenomenon.

In June 2017, the US formally withdrew from the Paris Climate Agreement, and four months later, the EPA announced that the CPP would be repealed. These two developments were directly connected, as the CPP was a route via which the US would have met its modest Paris emissions targets.

With both Obama-era legacies unpicked, the Trump administration moved towards implementing its own, far more polluter-friendly option, the Affordable Clean Energy plan. In keeping with his repeal and replace approach to Obama policy, Trump’s plan did not place limits on greenhouse gases, an aim that was central to the CPP. Instead it opted for an “inside the fenceline” approach, imposing less than stringent restrictions on individual power plants.

By chance, the earliest possible date that the US can legally withdraw from the Paris Climate Agreement is November 4, 2020, one day after the presidential election. As part of his US$2 trillion plan for Climate Change and Environmental Justice, Biden has vowed that the US will re-engage with the Paris deal. This is significant for environmental reasons but also as a demonstration to external observers that a post-Trump America will take its international obligations seriously.

In direct contrast to the Trump environmental agenda, Biden has pledged that his presidency would move America, the world’s largest polluting country, towards 100% green energy use by 2050. Trump’s plan offers an America First-focused alternative, prioritising US energy independence via further use of fossil fuels. On the environment, as with many other policy areas, the polarised options on offer reflect the state of the nation.

There is one aspect of the Obama legacy that cannot be undone, and that is the moment he sealed victory in 2008. Obama ran, however unrealistically, on a post-racial election ticket in 2008, and the world watched as America elected a young, highly educated, politically progressive black man for the first time as leader.

In the early years of his administration, issues not overtly related to race remained at the forefront of the political agenda. Nonetheless, the 2008 economic collapse and the nation’s ongoing healthcare crisis further laid bare the disproportionate systemic challenges that Americans of colour continued to face. Throughout his time in office, Obama was criticised by those on the left of “racial procrastination”.

Inevitably, a moment would come when Obama would have to confront the race issue. It arrived via the 2013 acquittal of charges against police officer George Zimmerman for the fatal shooting of unarmed black high-school student, Trayvon Martin. After Zimmerman’s acquittal, Obama offered unusually personal reflections, stating that Martin “could have been my son”. He was lauded for his empathy and simultaneously criticised for stoking racial tensions.

The moment, combined with the lengthy list of other Americans of colour on the receiving end of police violence, often fatally, ignited the Black Lives Matter movement. This presented Obama with an ever-narrowing tightrope to walk as the calls for racial justice grew louder in a nation where not everyone had come to terms with a president whose heritage included Kenya as well as Kansas.

As it turned out, America opted in 2016 to turn its back on the progress embodied by the first black man in the White House. Instead, as the writer Ta-Nehisi Coates put it, the US elected the nation’s “first white president”. Coates argued that Trump’s victory was in no small part predicated on negating the racial legacy of his predecessor. Obama may have broken the glass ceiling, an achievement that no-one could undo, but a determined successor could substantially paper over those cracks – and Trump made every effort to do so.

Once in office, Trump did not pretend to prioritise issues around racial justice – and his administration took repeated steps to reverse the proactive measures started during the Obama administration to call out institutional racism. Notably, in the context of the demands of the Black Lives Matters protests, Trump’s attorney-general, Jeff Sessions, stopped investigations into local police forces that had begun in 2015 in the wake of protests in Ferguson, Missouri, after the police shooting of Michael Brown in the city the previous year.

As protests grew in response to the police killing of George Floyd, in May 2020, Trump drew widespread criticism for adding to already boiling tensions via divisive words.

November 2020 will present voters with very different visions of how to manage race relations in this divided era. A president Biden would be unlikely to pursue the more radical demands of Black Lives Matters activists such as defunding the police, but there would probably be a change in tone from Trump’s confrontational language and a reintroduction of Justice Department investigations into local police forces.

The issues we’ve focused on here are a way to illustrate the strands of Obama’s legacy that Trump was so eager to dismantle. There are numerous further examples which show how Trump was determined to pursue a process of “de-Obamafication”. With the assistance of Republicans in Congress, and the agency heads he appointed, Trump succeeded in some, although far from all, of his rollback plans.

As voters head to the polls in November, they are faced with starkly different candidate choices. The US will have the opportunity to add another coat of whitewash over eight years of progressive efforts by its first black president, or reward the Biden half of the 2008 ticket – thereby reinforcing much of the Obama legacy. The stakes are high and the consequences of the choice facing voters is profound.