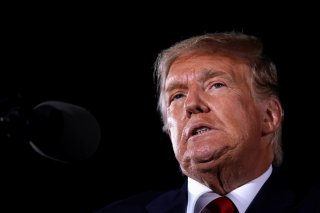 As many have noted, United States President Donald Trump embodies the very worst American traits. If one were to caricature America’s vices, from bombast to narcissism, heartless individualism and toxic machismo, one would come up with someone who looks very much like Trump.

Yet, by imbuing the president with all of America’s faults, supporters of Joe Biden and the Democratic ticket place too much faith in electoral politics. The removal of Trump will not erase America’s faults. Instead, like Irish playwright Oscar Wilde’s The Picture of Dorian Gray, Trump is just a reflection of America’s very soul.

By all means vote and otherwise participate in electoral politics. But don’t shy away from the painful process of self-examination in order to discover effective ways to heal divisions and address injustices in your own life and circle.

For my part, I have been striving to learn the ways I have benefited from the status quo and taking some concrete steps to better understand and support those who have been left out. There are many things we can do on a much more regular basis beyond voting every few years, and much closer to home. In my own context as a white settler in Canada, this book — which explains Canada’s Indian Act and its repercussions — has helped.

First published in Lippincott’s Monthly Magazine in 1890, and then a year later in extended book form, The Picture of Dorian Gray is Wilde’s take on the Faustian bargain. In it, the protagonist makes a deal with the devil for short-term gain followed by an inevitable downfall.

In Wilde’s novel, the young Dorian Gray sits for a portrait painted by his friend, Basil Hallward. Upon seeing the painting, Gray is struck by its youthful beauty and vigour, and despairs that, unlike the painting, he will age and decay. If only he could remain as youthful as the painting!

Unwittingly, by wishing so, Gray ensures that the painting itself will take on all the ravages of age and the distortions of wickedness, while Gray himself remains young and untainted by his actions, no matter how selfish and evil.

At first horrified by this situation and repulsed by the painting as it grows ever more sinister, Gray gives himself over to a life of hedonism, leaving many ruined lives in his wake. By the novel’s end — spoiler alert! — Gray is driven mad by his ludicrously consequence-free life, and recognizes that even though he has avoided the physical effects of his actions, his soul is as guilty as the painting is repulsive.

Stuck in a cycle of hurting others and living an unfulfilled and meaningless life of base pleasures, Gray turns to the painting as the cause of his inability to change for the better.

In the end, he thrusts a knife through the painting to destroy it and break its hold over him, but only manages to kill himself. The painting reverts to its former beauty as the twisted and newly aged body of the real Dorian Gray lies dead on the floor.

In a certain sense, America is fortunate to have in Trump a shocking image of its own excesses and divisions. Shocking images, after all, have the power to, well, shock. And sometimes a system needs a shock in order to correct itself.

Canada has many of the same vices as America, including growing inequality, an out-of-touch and cynical political class and its own demons of historic and systemic racism and exclusion, but it remains easy for many Canadians to say: “Well, at least we live in Canada!”

Without a figure like Trump reflecting their sins like Dorian Gray’s hideous portrait, Canadians are harder to rouse to react against the injustices and inequalities that surround them. Trump offers a useful focal point.

But such a focal point runs the risk of becoming a scapegoat.

Even if they might have been exacerbated over the past four years, America’s most pressing problems — such as deepening divisions in everything from income and wealth to political views, horrors facing desperate immigrants on the southern border and an absurdly partisan Supreme Court — pre-existed Trump and will outlast him.

Electoral politics up to this point, and even the administrations of supposedly “good” presidents, saw these pressing problems grow in intensity, and a Biden presidency will almost certainly do the same.

Like Dorian Gray, America is due for a reckoning with its own soul. Removing Trump will do no more good than destroying Gray’s portrait did.

Oscar Wilde used his protagonist to comment on late 19th-century English high society. Even though Dorian Gray represents an extreme example of the hedonism and indolence of the wealthy aristocracy — a caricature, even — Wilde certainly meant for his contemporaries to see themselves in the pages of his novel. Good literature, like all good art, should cause us to think critically about our world and our place in it. The best literature has the capacity to shock us into a new awareness, and even concrete action.

Many artistic works have been brought to bear to comment on current events, such as Margaret Atwood’s The Handmaid’s Tale. I suggest that The Picture of Dorian Gray should remind us, especially those of us gearing up for an important election, that the picture itself was never the problem.

Instead, the picture only revealed the darkness of Gray’s own soul, just as Trump lays bare the darkness in America’s soul (and the soul of many other nations besides).