Donald Trump's Coronavirus Tax Deferral Might Be a Nothing-burger 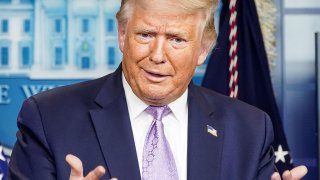 On Saturday, President Donald Trump signed a memorandum directing the Treasury Department to allow employers to defer their employees’ Social Security payroll taxes. The administration claims legal authority to take this step under the law that empowers Treasury to defer tax deadlines during national emergencies. Taxes that would have been collected in the last four months of 2020 could be postponed until sometime in 2021.

Few employers are likely to take advantage of the deferral, however, because of the difficulties and risks posed by the repayment of the deferred taxes in 2021. The deferral will therefore do little to help workers or the economy, although it will also cause little harm.

Employers who opted to defer would stop taking the 6.2 percent Social Security tax out of workers’ paychecks in September through December. (The 1.45 percent Medicare tax, which is also part of FICA, would not be deferred.) The deferral would cover workers making $2,000 per week or less — those making more would not qualify for any deferral, even on the first $2,000. During those four months, the affected workers would have higher take-home pay, up to an extra $124 per week.

As my colleague Kyle Pomerleau and other commentators (here and here and here and here) point out, though, difficulties would arise come payback time in 2021. In addition to resuming withholding of Social Security taxes, employers would presumably have to temporarily withhold extra money to repay the back taxes, which would have cumulated to a full week’s pay by that point. Workers might find the sudden drop in their take-home pay jarring. Moreover, employers would probably be unable to collect the back taxes from any workers who had left their jobs before the payback began — employers might end up being on the hook for those taxes. Many employers will surely hesitate to wade into this quagmire.

Of course, President Trump wants the deferred taxes to be forgiven, which would eliminate the payback problems. (Actually, he suggested on Saturday that he wants to go much further by making “permanent cuts” to the payroll tax and eventually “terminating” it, although his advisers walked back those comments the next day.) But no sensible employer would count on the taxes being forgiven.

The memorandum directs Treasury to “explore avenues, including legislation” to forgive the taxes, glossing over the lack of any avenues other than legislation. But Congress is unlikely to forgive the taxes. Despite the president’s claim on Saturday that both parties “want” a payroll tax cut and “just couldn’t come to an agreement,” such a cut has little support in either party. Neither the stimulus bill passed by the House nor the bill proposed by Senate Republicans includes a payroll tax cut. Because a payroll tax cut would have significant drawbacks, its dim prospects are reassuring.

Although the deferral will do little good, it will also cause little harm. Notably, the claim that the deferral will drain the Social Security and Medicare trust funds is unfounded. As my colleague Joseph Antos points out, the Medicare trust fund will be unaffected because Medicare taxes will not be deferred. The Social Security trust fund will lose interest income because it will receive some of its tax revenue a few months late, but the loss would be tiny even if all employers opted to defer.

Overall, this payroll tax deferral looks like a whole lot of nothing.

Learn more: The effect of Trump’s payroll tax deferral is uncertain | No payroll tax ‘holiday’ for Medicare — yet | Now more than ever, employees need a tax deduction for job expenses

This article by Alan D. Viard first appeared in AEIdeas on August 12, 2020.