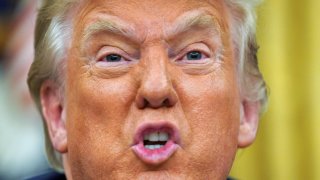 At his Wednesday press briefing, President Trump said “At the end of the year, on the assumption that I win, I’m going to terminate the payroll tax… We’ll be paying into Social Security through the general fund.” Millions of people have suddenly lost their jobs, and Social Security is facing a loss of millions in tax revenue. Under these circumstances, shifting Social Security financing to general revenues might sound like a smart move to protect retirement benefits for millions of Americans. But it also gives the unemployed one more reason to not look for a job.

Republicans have raised concerns about policies that discourage work. One of the major barriers to enacting the next COVID relief bill is the $600 weekly extra payment added to unemployment insurance (UI) that recently expired. In the $3 trillion Health and Economic Recovery Omnibus Emergency Solutions (HEROES) Act, House Democrats extended the full extra payment through the rest of this year. Republicans argued that paying people more than they could earn on the job keeps them out of the labor force, but they seem willing to go along with a $400 add-on.

If higher UI benefits discourage work — not entirely clear, given the shock to the economy that has shut down workplaces across the country — then making Social Security retirement benefits available without work requirements makes matters worse. Currently, you must work 40 calendar quarters to be eligible for retirement benefits. In 2019, the average retired worker received an average monthly benefit of $1,503 a month, accounting for about one-third of the income received by elderly. That is enough money to tie most workers to their jobs for the long term. Funding Social Security through general revenue breaks that link since everyone would be eligible for benefits regardless of their employment history.

This contradictory policy position confuses the short-term goal of providing immediate financial support to families during the pandemic-caused economic crisis and the long-term goal of stabilizing the Social Security program. A payroll tax holiday for four months as advanced by the president gives the average worker an extra $280 a month. The president’s proposal to forgive the deferred payroll taxes next year makes sense since we will still be in a deep recession and most workers will have difficulty paying the accumulated tax.

But eliminating the Social Security payroll tax (and possibly the Medicare payroll tax) is unlikely to be the spark that fuels rapid growth in the economy. Moreover, shifting to general revenues means either an income tax increase or — more likely if Republicans win in November — a permanent and growing increase in the national debt. According to the Social Security trustees, payroll tax revenue over the next decade is projected to total $12 trillion — more than half of the $20 trillion public debt (as of August 12). Eliminating the payroll tax probably has a stimulating effect on the economy in the near term. But over the long term, the bill will come due.

This article by Joseph Antos first appeared in AEIdeas on August 13, 2020.