Don't Be So Sure That China Is Going Headfirst Into Afghanistan 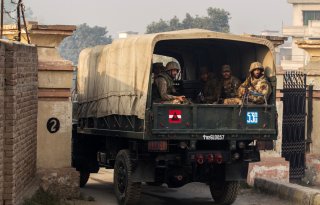 Here's What You Need To Remember: China is well aware of the maxim that Afghanistan is the ‘graveyard of empires’, and will tread lightly for the time being. Increased investments in the country are still risky as the Taliban remains in conflict with rival militant groups

On 18 July, Taliban leader Hibatullah Akhundzada said the group seeks strong diplomatic, economic and political relations with all countries including the United States. The Taliban soon revealed it had opened several channels of communication with foreign countries. China is among the first in the region to embrace — albeit cautiously — the new political reality shaping Afghanistan. For Beijing, the Taliban takeover presents opportunities as well as threats.

Chinese Foreign Minister Wang Yi met with a top-level Taliban delegation in Tianjin on 28 July. He labelled the Taliban ‘a pivotal military and political force’ and urged them to make a clean break with all militant organisations including the East Turkestan Islamic Movement (ETIM). In a phone call with US Secretary of State Antony Blinken — made shortly after Beijing confirmed its Kabul embassy is operating safely under Taliban rule — Wang even appealed for the international community to engage with the Taliban and ‘positively guide them’.

This recent pragmatic and less interventionist policy towards the Taliban was forced upon China by new realities on the ground, including several threats that loom after the US withdrawal.

China has significant economic investments and ambitions in the region, including the Amu Darya Oil Project, the Mes Aynak copper mine, and massive trade and infrastructure projects across the Eurasian landmass including an intention to expand the China–Pakistan Economic Corridor to Afghanistan. All of this is very much dependent on Afghanistan’s stability and China’s relationship with the Taliban.

Maintaining regional stability and securing Afghanistan’s borders is a major concern for China. It reasonably fears a spillover effect from the Taliban’s success to other militant groups in the region. The Taliban’s rapid advance in Afghanistan gave it control of strategic border crossings with Tajikistan, Uzbekistan, Iran, Pakistan and, crucially, the Wakhan Corridor bordering China.

This presence in the strategic Wakhan Corridor could act as leverage for the Taliban in negotiations with China. China’s overriding security concern in Afghanistan is a potential regrouping of the Uyghur-dominated East Turkestan Islamic Movement (ETIM), which it blames for attacks in its restive Xinjiang province. At least 500 ETIM fighters have reportedly gathered in Afghanistan’s Badakhshan province, which borders Xinjiang via the Wakhan Corridor.

The Tehreek-e-Taliban Pakistan (TTP) also poses a considerable threat to China. An attack on 14 July targeting a bus near the Kohistan–Dasu hydropower project site in Pakistan killed at least nine Chinese nationals. Investigations indicated that the attack was carried out by ETIM with the help of the TTP. China voiced its concerns about Afghanistan becoming a safe haven for these militant groups directly with the Taliban.

During the meeting in July, Taliban co-founder Mullah Baradar assured Beijing that they would ‘never allow any force to use Afghan territory to engage in acts detrimental to China’. With US forces now absent, Beijing will continue to engage with senior Taliban officials to ensure the safety of its borders and investments. The Taliban are now the only ally China can turn to in order to defend against these groups on its vulnerable Western border.

For the Taliban, diplomatic relations with China presents an opportunity for support and investment in reconstructing a war-torn Afghanistan, particularly with possible G7 sanctions on the Taliban looming large.

Regardless of whether the Taliban keeps its promises, it is undeniably a key force shaping regional security that will attract interest from other countries. This will factor into China’s calculations. While Russia continues to designate the Taliban as a terrorist group, it still has diplomatic contacts with the group. India also has backchannel communications with the Taliban aimed at protecting its security and economic interests.

To help it shape regional engagement, China may seek a bigger role for the Shanghai Cooperation Organisation (SCO) going forwards. Common geostrategic interests are likely to increase between China, Russia — an SCO member — and Iran, which is an observer on its way to becoming a full member. All three nations have not closed their embassies in Kabul and are in constant touch with Taliban officials. Considering its 25-year bilateral cooperation program signed with China, Iran may have an accelerated entry into the SCO. China will have a role to play in consolidating the efforts of SCO nations to build a stable neighbourhood through mechanisms like the SCO–Afghanistan Contact Group.

But all things considered, will China get its hands dirty in Afghanistan?

Given that both the Taliban spokesperson Suhail Shaheen and the Chinese Foreign Ministry denied recent reports of China taking over Bagram airbase, it is unlikely that we will see more than positive diplomatic statements from China in the short term. China is well aware of the maxim that Afghanistan is the ‘graveyard of empires’, and will tread lightly for the time being. Increased investments in the country are still risky as the Taliban remains in conflict with rival militant groups. Technical support for reconstruction could be the immediate starting point for China’s engagement in Afghanistan.