Each U.S. F-35 Could Soon Be Fighting With Its Own Fleet Of Drones 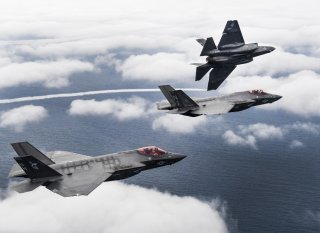 Here's What You Need To Remember: It is extremely important to maximize the improved sensor-to-shooter times enabled by advanced networking while also tailoring distribution in the most efficient way to empower decision-makers under fire in heavy combat. In essence, advanced networking can both be leveraged and properly managed by capable human decision makers.

It’s called “weapons forward,” the idea that an airborne fighter jet could control an advancing armed drone traveling into high-threat enemy territory. Many refer to it as the “loyal wingman” phenomenon wherein a fighter pilot operates nearby drones from the cockpit, increasing the pilot’s range, reducing latency and optimizing the entire sphere of attack possibilities.

While drones have carried weapons for many years, they are operated often at great distances from ground control centers and have their mission specifics determined from through a high-echelon command network. Drawing upon airborne manned-unmanned teaming, however, changes this equation by enabling vastly enhanced tactical proficiency out at the edge of warfare, Air Force General James Holmes, Commander, Air Combat Command, told Lieutenant General Dave Deptula (retired), Dean of the Mitchell Institute for Aerospace studies in a recent interview.

Holmes flatly explained the clear advantage in terms of having an ability to attack with an F-35 or F/A-18 Super Hornet becomes exponentially improved by virtue of airborne manned-unmanned teaming. Forward drones can conduct ISR missions, carry supplies into heavy counterfire, function as a refueler or even fire weapons themselves when commanded by a human.

“With the situation we are in with Russia and China, if they know they only have to target 10s of airfields, or even 100 ports and airfields where we have to get resources to get close enough to operate, we simplify their problem. What can we do to move away from our dependence upon those ports and airfields?” Holmes said.

In effect, having a single pilot operate multiple drones offers a massively expanded sphere of attack angles and possibilities, greatly complicating an enemy’s ability to respond. The intent is to sustain a varied, high tempo of combat power with lower risk to pilots and at greater ranges than manned aircraft can operate. More dispersed areas of attack, including different kinds of air vehicles, altitudes, sensors and weapons, present substantial challenges for enemies hoping to defend against them.

“Instead of operating out of five airfields, we operate out of 100 airfields to complicate an enemies’ targeting problem,” Holmes added.

Bringing all of this to fruition relies upon effective, secure command and control networking, something which is a fast-increasing emphasis for air combat commanders and Air Force weapons developers. The concept to both leverage advanced networking while also empowering attackers at the edge of combat to make time-sensitive decisions.

“The idea is to have a system that will let us communicate commanders’ intent and push the data to the people who need it to win the battle of long-range fires, to out target, out think, out tempo and out range the enemy,” Holmes described.

Should every combat decision, emerging throughout fast-changing war circumstances need to reach all the way up to a single, high-echelon, multi-domain command and control center, mission efficacy might be decreased. Therefore, Holmes described the intended combat strategy as almost a sort of paradox, meaning it is extremely important to maximize the improved sensor-to-shooter times enabled by advanced networking while also tailoring distribution in the most efficient way to empower decision-makers under fire in heavy combat. In essence, advanced networking can both be leveraged and properly managed by capable human decision makers. Training advanced algorithms, increasingly able to improve autonomy and use AI, will be necessary to bring this kind of application to the next level, Holmes explained.