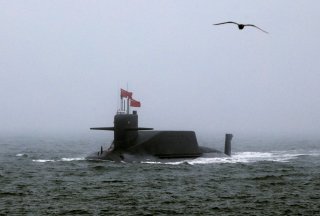 Here's What You Need to Remember: The Chinese government is not disposed to transparency regarding its military accidents. For example, it does not release the results of its investigations into jet fighter crashes and it never publicly acknowledged earlier submarine accidents. At the time, some commentators expressed surprise that Beijing acknowledged the incident at all, and speculated it was obliquely related to contemporaneous criticism of Beijing’s attempts to downplay the SARS epidemic.

On April 25, 2003, the crew of a Chinese fishing boat noticed a strange sight—a periscope drifting listlessly above the surface of the water. The fishermen notified the People's Liberation Army Navy (PLAN) which promptly dispatched two vessels to investigate.

At first, the PLAN believed the contact to be an intruding submarine from South Korea or Japan. But when Chinese personnel finally recovered the apparent derelict they realized it was one of their own diesel-electric submarines, the Ming-class 361.

Military commissioner and former president Jiang Zemin acknowledged the tragic incident on May 2, 2003, in a statement honoring the sacrifice of Chinese sailors' lives and vaguely characterizing the cause as “mechanical failure.”

The lack of a clear official explanation has led to various theories over the years. The typical complement of a Type 035 submarine is fifty-five to fifty-seven personnel, but 361 had seventy on board. Officially these were trainers, but conditions would have been quite cramped. The presence of the additional personnel and the high-ranking Commodore Cheng leads to the general conclusion that 361 was not on a routine mission.

Indeed, some commentators speculated that the additional crew was observing tests of an experimental Air Independent Propulsion (AIP) system which would have offered greater stealth and underwater endurance. As it happens, another Type 035G submarine, 308, was used to test an AIP drive, and Stirling AIP drives would soon equip the prolific Type 041 Yuan-class submarines which prowl the seas today.

A conventional diesel-electric submarine uses an air-breathing diesel engine to charge up its batteries for underwater propulsion. This is usually done while surfaced—but a submarine attempting to remain undetected can also cruise submerged just below the surface and use a snorkel to sip air. The snorkel is designed to automatically seal up if the water level gets too high.

Apparently, the motor consumed most of the submarine’s air supply in just two minutes. The crew might have felt light-headed and short of breath during the first minute and would have begun losing consciousness in the second. The negative air pressure also made it impossible to open the hatches. A 2013 article by Reuters repeats this theory as well as mentioning the possibility that was exhaust was improperly vented back into the hull to fatal effect.

Only high standards of maintenance, manufacturing, and crew training can avert lethal peacetime disasters—standards which are difficult for many nations to afford, but which the PLA Navy likely aspires to it as it continues to expand and professionalize its forces at an extraordinary rate.