Even After 60 Years, the Northrop F-5 Still Punches Above Its Weight 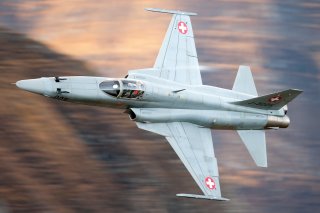 Here’s What You Need to Remember: The F-5 can punch above its weight in air-to-air combat,

More than sixty years have gone by since the first introduction of the Northrop F-5, which took its maiden flight in 1959 and saw service in Vietnam throughout the following decade. Most aircraft from the 1950s have by now been retired; those few that remain, including the B-52 Stratofortress, have undergone extensive maintenance and upgrades since then.

The same can be said of the F-5, which sees limited service in the United States but has been extensively exported around the world. The plane’s largest draw is its affordability—it is a simple fighter jet that requires relatively low maintenance costs and is easier for countries without sophisticated aerospace programs to maintain. Another substantial benefit is its versatility; much like the F-35 plane is capable of filling multiple different roles if needed, the F-5, primarily intended as an air-superiority aircraft, is also able to conduct ground-attack missions well. The United States demonstrated this in Vietnam, when the plane, as part of “Project Skoshi Tiger” (Little Tiger), launched hundreds of highly successful low-level raids against North Vietnamese targets.

And if it needs to, the F-5 can punch above its weight in air-to-air combat, too. Following its 1979 revolution, Iran inherited hundreds of F-5 jets given to the country’s previous government by its primary backer, the United States. A year later, when Saddam Hussein invaded the country, it put the planes to good use—alongside the far more capable F-14 Tomcats—repelling the Iraqi invaders. An Iranian F-5 reportedly shot down an Iraqi MiG-25, normally regarded as a superior aircraft, in 1983.

The plane was constructed through the 1960s and 1970s, mostly in Torrance, California. The final F-5 rolled off the assembly line in 1987 after more than 2,700 of the aircraft had been constructed. Among other nations, it has been exported to Greece, Turkey, South Korea, Taiwan, Canada, Norway, Spain, Thailand, and South Vietnam, though they subsequently fell into the hands of North Vietnam after the fall of Saigon.

While around five hundred of the jets continue to see service in the United States, they are used as trainer aircraft, and as “aggressor aircraft” that pilots practice against in training exercises. Plans to replace the F-5 with the proposed F-20 Tigershark, an upgraded version, fell through after Northrop was unable to elicit interest in buying the planes abroad; sales were targeted at nations that already used the F-5, and for the most part, those nations had little reason to abandon the highly capable plane.