Expectation vs. Reality: The Sino-Russian Partnership in the Arctic 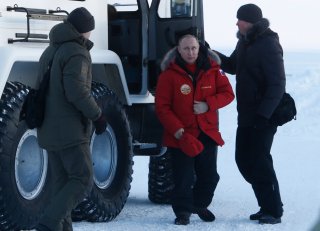 Australian specialist in Russian polar strategy Elizabeth Buchanan has urged lawmakers in the United States to reconsider key assumptions about the impact of the China–Russia relationship on strategic issues in the Arctic.

The following is an edited summary of Dr Buchanan’s evidence to the US House Committee on Foreign Affairs and the Congressional Energy and National Security Caucus in which she argued that three widely held assumptions about Russia, China and the Arctic were wrong.

Strengthened commercial engagement between Russia and China on Arctic energy ventures is driving a notion that there’s a Sino-Russian alliance in the region.

The reality is that mutual mistrust, centuries-old territorial tensions over the Russian Far East and hangovers from the Sino-Soviet split in the Cold War are all permanent features of the China–Russia relationship. They’ll continue to shape the strategic outlook, to an extent curtailing the two states’ ‘axis’ potential.

Moscow and Beijing have both learned that nations don’t have allies, or partners. Secure, successful states seek merely mutually beneficial relationships. That sentiment frames Sino-Russian engagement in the Russian Arctic.

Of the eight voting members of the Arctic Council, Russia took the most convincing to grant China its observer status in 2013. Moscow approved membership, and with it legitimacy, on the basis that Beijing explicitly acknowledged the sovereignty of Arctic-rim states and reaffirmed its commitment to the legal architecture of the Arctic region—the United Nations Convention on the Law of the Sea.

Since 2014, with Western sanctions over Russia’s annexation of Crimea and sustained aggression in Ukraine, Moscow has had a cashflow problem. When sanctions targeted energy projects in the Russian Arctic, China wasted no time in offering capital injections and technology for offshore exploration.

This doesn’t mean that Beijing is tying all energy security plans to the Russian Arctic zone. Chinese Arctic engagement is driven by energy insecurity. Beijing diversifies its energy imports across the globe, and the Russian Arctic energy ‘pot’ is but one more source.

China is also engaging in a mutually beneficial arrangement with Russia to access the Northern Sea Route, which slashes transit between Asia and Europe by roughly half and presents attractive savings for Chinese shipping. Russia hasn’t given China privileged use of the route. Chinese vessels have been refused entry, and those that pass abide by Russian transit laws—vessels must be piloted by Russian pilots, tolls are charged, and Russia must be pre-warned about trips. China is actively engaging with other Arctic-rim powers and has commercial ventures, investment plans and entrenched soft-power strategies in Norway, Canada, Iceland and Greenland.

China is also driven by the prestige a polar footprint brings, supported by its icebreaker-building capabilities. Russia is aware of the rationale behind China’s Arctic strategy. Any efforts by Beijng to move beyond the agreed terms of its arrangement with Moscow or failure to uphold its observer status commitments will no doubt encourage deeper cooperation among the Arctic-rim states. How closely China adheres to the legal and sovereign Arctic arrangements will signal the limits to its relationship with Russia.

Another assumption, that Russia has an expansionist agenda in the Arctic, is generational but strategically incapacitating. It follows the notion that Moscow’s military modernisation and securitisation of Arctic policy and planning are indicators of neo-imperialist ambitions there. This concern is sharpened by the Kremlin’s public affairs stunts like planting the Russian flag on the seabed of the North Pole.

Russia’s northwest Arctic zone has historically housed its nuclear-armed Northern Fleet. This military capability, as well as the strategic location and Soviet-era bastion policy of area denial, never really went away with the fall of the Soviet Union. It fell into disrepair and, under President Vladimir Putin, the military has undergone a vast modernisation program. Moscow has reopened military bases along its Arctic frontier. Geographically, Russia is the largest Arctic player, and more than 50% of the Arctic Ocean is Russian coastline.

A 2008 US geological survey indicated that most of the region’s oil and natural gas lies in the Russian Arctic. Russia under Putin has renationalised energy as its future economic base. Resource deposits in the Russian Arctic zone (onshore and offshore) have immense economic potential and thus national security primacy. Russia’s Arctic strategy is built on both economic security and frontier border security objectives.

Securitising economic interests and increasing activity on the Arctic border fall short of an expansionist agenda. Peel back the posturing and the Arctic ‘arms race’, and Russia’s Arctic priority remains stability. Continued regional cooperation with its NATO-member and Western Arctic neighbours remains a central strategic objective. Keeping the arena free of conflict is crucial to ensuring the Northern Sea Route remains open and commercially viable. Russia needs to be able to deliver secure, trusted and unimpeded energy supplies from its northern frontier to Asian energy clients.

Of course, opportunities to ‘grab’ territory beyond the Russian Arctic zone have yet to be seized by Moscow. This expansionist expectation refers to the broader continental shelf debate—who ‘owns’ the North Pole. Arctic-rim powers Russia, Denmark (by way of Greenland) and Canada have submitted claims to formally extend their exclusive economic zones, which overlap in the high Arctic Ocean.

Russia’s territorial and maritime disputes—notably with Norway in the Barents Sea and the US in the Bering Strait—have long been resolved. So, where in the Arctic is Moscow looking to expand? It’s well within Russia’s interests to uphold the international legal architecture of the Arctic, particularly UNCLOS, as agreed by stakeholders. This is a simple case of revenge of geography.

A final assumption is that Russia has fallen into Beijing’s debt-trap diplomacy and that it is overreliant on Chinese capital and ownership in joint ventures for energy projects in the Arctic. In reality, Russia has worked to offset Chinese investment and the risk of overreliance in energy ventures. That’s a delicate balance. On one side of the energy security ‘coin’, Russia relies on Chinese demand for Arctic LNG, but Moscow has worked to diversify its capital pools. Saudi Arabia, Japan, India and South Korea are all linked to Russian Arctic energy ventures.

Russian law stipulates that while private Russian energy firms can develop in the Arctic zone, they may not cede controlling stakes to foreign firms. Neither of the two key LNG projects on the Russian Arctic’s Yamal Peninsula is ‘owned’ by China. Beijing’s share in the Yamal LNG venture is 29.9%, Russia’s Novatek holds 50.1% and France’s Total holds 20%. In the Arctic-2 LNG project, China holds 20%, Novatek holds 60%, Total holds 10% and the remaining 10% is held by a Japanese consortium. We can expect Russia’s upcoming Arctic energy projects located near the Yamal Peninsula ventures to attract diverse capital pools.

Sino-Russian Arctic ties will continue to be predictable. The relationship built upon an energy security foundation will remain mutually beneficial—until it is not. Russia’s foreign energy strategy and broader Arctic security agenda rely on predictability. The Russian Federation’s economic base is predicated on the Arctic remaining a zone of low tension to ensure the Northern Sea Route—an economic artery—remains conflict-free.

Moscow is unlikely to plunge into conflict the region it holds the largest stake in, and which it has tied its future economic and social security to. Any Arctic tensions will come from a misreading of Russian interests or a misunderstanding of basic geography or of how international law applies in the region.