Expecting the Child Tax Credit? Billionaire Jeff Bezos Got It Too (What?) 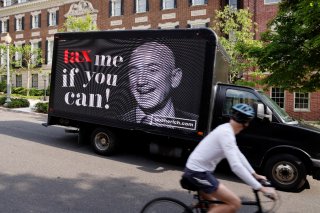 Here's What You Need to Remember: At the time, this check that the Amazon mogul received from the IRS would have added roughly 0.0000002% to his total net worth. Since then, that number has grown roughly tenfold, making Bezos the second-richest man on Earth and adding another zero to the decimal.

In the fall of 2020, a New York Times report declared that President Donald Trump – ostensibly worth upwards of $2 billion – had paid only $750 in federal taxes in 2017. Amid the outcry surrounding the various tax loopholes the former president had used – infamously including haircuts as a business expense – came a broader outcry on the issue of tax avoidance among the super-wealthy.

While Trump is gone, the problem of tax avoidance is not. A recent ProPublica report declared that in 2007 and 2011, when Amazon CEO Jeff Bezos was worth a meager $18 billion, he paid no federal income taxes.

This discovery was recently published as part of a larger expose on wealthy individuals including Mark Zuckerberg, Bill Gates, Elon Musk, and Rupert Murdoch. The report uncovered that, in 2011, Bezos claimed the Child Tax Credit for his three sons and daughter, ultimately receiving a $4000 check from the IRS.

According to the rules of the Child Tax Credit at that time, households could not earn the credit if their income exceeded $100,000 per year. While Bezos had very clearly gained more than $100,000 that year, the billionaire was legally justified in claiming the credit: he persuaded the IRS that he had made bad investments in 2010, and hence had lost more money than he had earned. These investments were discounted from his tax bill, leaving him with no taxable income – and allowing him to claim the $4000.

Bezos’s massive wealth, as with many of the ultra-rich, does not primarily come from his salary. Instead, most of his money comes from his ownership of roughly ten percent of Amazon, the e-commerce giant he founded in his garage in 1994. Until Bezos sells these stocks, he does not need to pay any taxes on their gains. Therefore, as far as the IRS’s $100,000 limit was concerned, the stocks did not exist.

At the time, this check that the Amazon mogul received from the IRS would have added roughly 0.0000002% to his total net worth. Since then, that number has grown roughly tenfold, making Bezos the second-richest man on Earth and adding another zero to the decimal. But a penny saved is a penny earned, and there is no question that Bezos has saved a lot of pennies in tax avoidance. According to ProPublica, he paid $1.4 billion in federal income taxes between 2006 and 2018, during which time his personal fortune increased by $127 billion – a tax rate of 1.1 percent.

On the bright side, if Jeff Bezos qualified for the Child Tax Credit, you probably do, too.