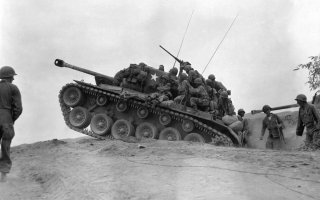 It’s not hard to see the logic of the decision. The Iraqi Army was deeply implicated in the Baathist power structure that had dominated Iraq for decades. Many of its officers had committed war crimes, often against other Iraqis. It was heavily tilted towards the Sunnis, with few Shia or Kurds in positions of responsibility. Finally, it had, from the American perspective, a recent history of appallingly poor military performance. As Bremer argued, it had largely dissolved in response to the U.S. invasion of Iraq.

But this was not how many Iraqis viewed the army. The Royal Iraqi Army had come into existence in the early 1920s, when Iraq remained a protectorate of the British Empire. It had revolted in 1941, but the British made the wise decision to keep the force together so as to maintain order. In 1948, its units fought against Israeli forces during the wars of Israeli independence, and it participated in the 1967 war, if briefly. In the 1980s, it waged an eight-year struggle against Iran. While its legacy was complex, for many Iraqis, service in the Army (and in particular its performance against Iran) remained a source of personal and national pride. Eradicated was eighty years of institutional history.

It’s impossible to say how the reconstruction of the Iraqi Army might have played out differently, but then it’s difficult to imagine how it could have been worse. The Iraqi Army has consistently failed in the most elementary of military tasks when not directly supported by American forces. It remains unpopular in broad sectors of Iraqi society, and its performance against lightly armed ISIS fighters has made it the laughingstock of the region.

American military failures have undoubtedly had an impact on the country’s strategic position, but have yet to fundamentally undercut national power. The United States recovered quickly from Operation Drumbeat, Antietam, the disbanding of the Iraqi Army and the defeat in Korea.

National greatness depends on more than simply victory in battle, as the persistence of U.S. power suggests. Nevertheless, each of these avoidable defeats proved costly to the United States—in blood, treasure and time.

This article first appeared in October 2014.