Explained: What Does "Defund the Police" Actually Mean? 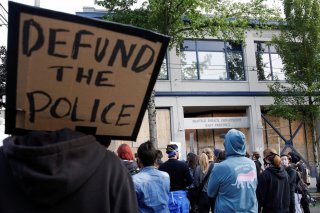 “Defund the police” has become the newest rallying cry for the left and it’s no longer confined to radicals and activists.

Some local lawmakers are going a step further to say “dismantle” or “abolish” the police, while left-leaning media outlets are giving credence to the fledgling movement.

The idea could mean different things to different advocates, but at a minimum it means slashing police department resources.

“It’s an extremely irresponsible and reprehensible recommendation specifically for the outcomes that we know would come about in exactly the kind of communities for which these proposal are being made,” Rafael Mangual, deputy director of legal policy at the Manhattan Institute, a conservative think tank in New York, told The Daily Signal.

Here are four things to know about the “defund the police” movement.

1. Where Is Defunding Happening?

The May 25 death of Floyd, captured in a cellphone video showing Chauvin’s knee on his neck for more than eight minutes, has prompted two weeks of civil unrest.

A veto-proof majority of nine members of the Minneapolis City Council announced that they backed getting rid of the city police force—and didn’t even have a plan for what to do next.

“We recognize that we don’t have all the answers about what a police-free future looks like, but our community does,” council members said in a public statement issued over the weekend, the Minneapolis StarTribune reported:

We’re committed to engaging with every willing community member in the City of Minneapolis over the next year to identify what safety looks like for you. …

We are here today to begin the process of ending the Minneapolis Police Department and creating a new, transformative model for cultivating safety in Minneapolis.

The nine council members included President Lisa Bender and Jeremiah Ellison, son of Minnesota Attorney General Keith Ellison, who is leading the prosecution of Chauvin and the other three officers.

“This council is going to dismantle this police department,” the younger Ellison said.

Minneapolis Mayor Jacob Frey tried to speak to a crowd Sunday, saying at one point, “I do not support the full abolition of the police department.”

The mayor’s opposition to a “police-free” Minneapolis won’t matter against a veto-proof majority.

The Minneapolis StarTribune reported that in 2019, serious crimes such as robbery, burglary, and assault spiked 13% in the city. Two-thirds of the city’s 81 neighborhoods saw increases, including a downtown area that had a 70% increase.

The nation’s two largest cities are pushing major funding cuts to their police departments, which may not appease activists demanding full-scale abolition. The proposed cuts could spread to more cities.

In Los Angeles, Mayor Eric Garcetti announced major cuts to the, but not abolishing the Los Angeles Police Department.

“Thank you to all who marched for racial justice and equality for Black Americans this weekend,” Garcetti tweeted Monday. “This is a pivotal moment. Here in L.A., we’re starting by identifying $250M, including cuts to LAPD budget, to further invest in communities of color and confront structural racism.”

Of those $250 million in cuts, up to $150 million is expected to come from the police force, the Los Angeles Times reported.

New York City Mayor Bill de Blasio said he would slash funding for police and shift money to social services in a revised budget proposal. The mayor didn’t provide specifics for the cuts.

The New York City Police Department accounts for $6 billion of de Blasio’s proposed annual budget of $90 billion for the city.

Although paying for policing is a local decision, not a federal one, some members of Congress are jumping into the movement without qualification.

“When we dismantle it, we get rid of that cancer, and we allow for something beautiful to rise,” Omar told a group of protesters Saturday, adding:

One of Omar’s colleagues in a small group of House freshmen known as “the squad” said that all elected officials must back the “defund the police” movement.

“This is what political courage is for. Political courage. There are moments in everyone’s careers where you have to be willing to stand up and say, ‘Am I willing to sacrifice all of the privileges I have?’” Rep. Alexandria Ocasio-Cortez, D-N.Y., said during an online conference with supporters. “If you’re an elected official for any reason that is on this call, I’m asking you to ask yourself what are you willing to sacrifice to make sure that overfunded police departments are defunded.”

House Democrats as a whole are taking a less extreme approach and announced legislation Monday that was crafted by the Congressional Black Caucus.

Among other things, the bill would prohibit discriminatory profiling of any kind, ban chokeholds and no-knock warrants, mandate dashboard cameras for police vehicles, establish a national police misconduct registry, and make it easier to prosecute officers and sue individual officers.

3. Where Is Public Opinion?

Although loud protesters are demanding defunding, dismantling, or abolishing police across the country, it’s a long way from a majority opinion.

Although some might think from media coverage that much of the Democratic base supports it, only 16% of Democrats in a Yahoo/YouGov poll say they support defunding the police. That’s statistically even with just 15% of Republicans who say they back the idea.

“Despite calls by activists and protesters to defund police departments, most Americans do not support reducing law enforcement budgets,” Yahoo/YouGov said of its poll. “Close to two-thirds (65%) oppose cutting police force funding. Just 16 percent of Democrats and 15 percent of Republicans support that idea.”

There is clear evidence of potential consequences from Floyd’s death two weeks ago, the Manhattan Institute’s Mangual said.

“One piece of evidence here to consider is the fact: Is it a coincidence that while police were occupied with violent protests in the city of Chicago, we experienced the most violent weekend of 2020 outside the protests, in the neighborhoods where shootings are a regular occurrence?” Mangual said.

He said he doesn’t think the “defund the police” idea has reached a tipping point to become a serious movement.

Mangual rejected the idea “that we would deprive black and brown communities of police forces who—whether you like them or not—bring about a great deal of peace by intervening in criminal acts and taking criminals off the streets,” adding:

The idea that gang members and repeat offenders ought to be walking the streets because there aren’t any police to take them away is one that is very cavalier with the lives of law-abiding citizens in America’s most dangerous neighborhoods.

4. Is Defunding Police as Bad as It Sounds?

Some want to reallocate big chunks of police budgets to social programs, which would be more budget cutting than defunding altogether, as in New York and Los Angeles. Others want to end police altogether—as in Minneapolis—and possibly replace police forces with something else entirely.

Even Patrisse Cullors, a co-founder of the Black Lives Matter movement, told WBUR in Boston that the goal was about reallocation of funding.

“The demand of defunding law enforcement becomes a central demand in how we actually get real accountability and justice, because it means we are reducing the ability of law enforcement to have resources that harm our communities,” Cullors said, adding:

And with that demand, it’s not just about taking away money from the police, it’s about reinvesting those dollars into black communities. Communities that have been deeply divested from, communities that, some have never felt the impact of having true resources. And so we have to reconsider what we’re resourcing. I’ve been saying we have an economy of punishment over an economy of care.

MPD150, an advocacy group in Minneapolis, where defunding the police force appears all but certain, is in the more radical camp that also calls for other police departments to be defunded.

“The people who respond to crises in our community should be the people who are best-equipped to deal with those crises,” MPD150 says. “Rather than strangers armed with guns, who very likely do not live in the neighborhoods they’re patrolling, we want to create space for more mental health service providers, social workers, victim/survivor advocates, religious leaders, neighbors and friends—all of the people who really make up the fabric of a community—to look out for one another.”

Crime isn’t random. Most of the time, it happens when someone has been unable to meet their basic needs through other means. So to really ‘fight crime,’ we don’t need more cops; we need more jobs, more educational opportunities, more arts programs, more community centers, more mental health resources, and more of a say in how our own communities function. …

The history of policing is a history of violence against the marginalized—American police departments were originally created to dominate and criminalize communities of color and poor white workers, a job they continue doing to this day. The list has grown even longer: LGBTQ folks, people with disabilities, activists—so many of us are attacked by cops on a daily basis.

Christy E. Lopez, a professor at Georgetown Law and co-director of the school’s Innovative Policing Program, wrote an op-ed in The Washington Post advocating defunding.

Lopez argued that the idea is not as scary as it sounds:

Defunding and abolition probably mean something different from what you are thinking. For most proponents, ‘defunding the police’ does not mean zeroing-out budgets for public safety, and police abolition does not mean that police will disappear overnight—or perhaps ever. Defunding the police means shrinking the scope of police responsibilities and shifting most of what government does to keep us safe to entities that are better equipped to meet that need. … Police abolition means reducing, with the vision of eventually eliminating, our reliance on policing to secure our public safety.

This article by Fred Lucas, @FredLucasWH, and Leave a comment first appeared in The Daily Signal on June 8, 2020.