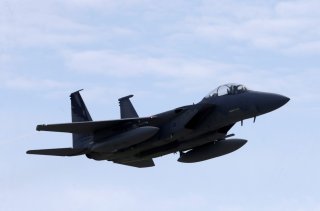 “I was landing at approximately twice the normal landing speed. I put the tail hook down and there was a cable about a third of the way down the runway and it went into that cable.”

The tail hook Nedivi hoped would slow their landing was ripped off of the aircraft almost instantly, and for a split second, it seemed their miraculous flight was for naught, as the barricades at the end of the airstrip were fast approaching.

“We stopped maybe 20 feet short of the barrier,” Nedivi recalls.

As Nedivi tells it, it was only then that he turned to shake hands with his instructor Gal, only to finally see the real extent of the damage. The right wing of the aircraft hadn’t been present for the last ten miles of their flight.

Even the F-15’s manufacturer didn’t believe it

It’s safe to say that McDonnell Douglas was already well aware that their F-15 Eagle was an incredibly capable platform, but even they were reluctant to believe that the Israeli aviators had managed to fly one without a wing. Upon receiving word of miraculous flight, they sent a team to Israel to inspect the aircraft and see for themselves.

“Their first inclination was that it was a taxiing accident, it couldn’t happen in the air. It was only when they went to analyze and said, okay, the F-15 has a very wide body. If you fly fast enough, you’re like a rocket. You don’t need wings,” Nedivi said.

“I don’t think any other aircraft could have taken that amount of damage, or had that portion of its flight surfaces removed and continue to bring us home safely,” Nedivi said.

In a testament to just how incredibly tough these aircraft really are, the damaged F-15, Baz 957, was transported to a maintenance facility in Tel Nof, where it was given a new wing and returned to service.

Two years later, that same jet would score yet another kill, this time against a Syrian Mig-23. According to Nevini, it wasn’t his skill as a pilot that got them home, it was the incredible F-15 itself.

“The best testament was a good friend of mine who was an F-16 pilot, and he crossed and saw that there was no wing and his first words were, ‘can I transfer to F-15s?’”

This article first appeared at Sandboxx News. It is being reprinted due to reader interest.