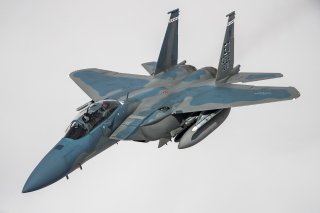 Here's What You Need to Know: The F-15 has already squared up against a number of capable fighters and emerged on top. In fact, of the 104 air-to-air duels the F-15 has entered, it has lost exactly zero of them. Not too shabby.

On Tuesday, the first ever F-15EX took to the skies in a test flight that brought the U.S. Air Force that much closer to fielding what may be the most capable 4th generation fighter on the planet. The F-15 has been in service for more than 45 years to date, and is widely regarded as the most successful air superiority fighter in history.

“Our workforce is excited to build a modern fighter aircraft for the U.S. Air Force. Our customer can feel confident in its decision to invest in this platform that is capable of incorporating the latest advanced battle management systems, sensors and weapons due to the jet’s digital airframe design and open mission systems architecture.”

The last time the U.S. Air Force took delivery of an F-15 was in 2004, but the aircraft’s design has not stagnated in the 17 years since. Boeing, who absorbed the F-15 program when they merged with McDonnell Douglas in 1997, has been updating and improving the F-15 for foreign sales throughout. In fact, foreign purchasers in Saudi Arabia and Qatar have funneled more than $5 billion into improving the F-15 Eagle as America moved on to sourcing more advanced, stealth fighters. The result of all this time and money is an incredibly capable iteration of the F-15 that couples advanced avionics with the low maintenance cost of non-stealth fighter.

Most of the world still relies on 4th generation fighters for engagements in the sky, which means the F-15EX may have some stiff competition… but this new bird isn’t resting on the F-15’s historic laurels. Instead, it just may be the baddest fighter of its generation anywhere on the planet.

In this era of flying stealth supercomputers like the F-35 Joint Strike Fighter and F-22 Raptor, many have questioned the wisdom of purchasing a slew of new old fighters. The F-15EX does not boast any stealth capabilities, nor does it have the same knack for sensor fusion that has earned the F-35 the unofficial nickname of “quarterback in the sky.” Despite this apparent lack of capability, the Air Force is procuring F-15EXs at a cost of around $87.7 million each, as compared to the now lower F-35 price of just $77.9 million per aircraft.

This price differential only emboldens the F-15EX’s critics, who point out that the F-35 offers a far wider variety of capabilities and is considered much more survivable in contested airspace (thanks to its stealth capabilities). When you only consider those figures, the F-15EX may seem like a pretty poor choice.

However, the reality of military acquisitions and combat capability are far more nuanced than a side-by-side tale of the tape might represent. While the F-15EX may indeed cost more per airframe than the latest batch of F-35s, it may actually be the savvier purchase. The F-35 is intended to have an operational lifespan of around 8,000 hours, whereas each F-15EX is expected to last 20,000. In other words, in order to fly the same number of hours as an F-15EX, the Air Force would need to purchase not one, but three F-35As.

That price reduction is further bolstered by operational costs. Keeping a high performance fighter in tip-top shape is expensive and time consuming, but in that portion of the ledger, the F-15EX once again shines. The Air Force expects to spend around $29,000 for every hour the F-15EX is in the air, far cheaper than the F-35’s figures recorded in 2018 of around $44,000 per hour. Now let’s do a bit of back-of-the-envelope math to assess how much these aircraft will actually cost in a fight.

Now, it’s important to note here that this math is egregiously simplified: Lockheed Martin and the Air Force are already working tirelessly to reduce the operating costs of the F-35 (because the Air Force says they can’t afford them if they don’t).

The cost per hour of the F-35 is sure to drop in the years to come — and just as importantly, the F-35 is a stealth platform built largely to engage ground targets. The F-15EX, on the other hand, is an air superiority fighter designed to duke it out in the skies. Both of these aircraft are capable of either role, but at a fundamental level, these jets simply aren’t built to do the same jobs. It might help to think of them as NASCAR and Formula 1 racers: Both are extremely capable platforms, but they’re each highly specialized for their specific use. The new F-15EXs the Air Force buys won’t fill F-35 spots, but will instead replace aging F-15s in America’s existing arsenal.

What makes this new F-15 better than our old ones?

The United States currently maintains a fleet of around 230 F-15s in various trims (C/D). These jets represent the crux of America’s fourth generation air intercept fighters. The F-22 Raptor was intended to serve as a replacement for the F-15, but the program was canceled after just 186 Raptors were delivered.

The F-15EX isn’t stealthy, but it does boast an electronic warfare suite that will help make it more survivable in contested airspace. Its streamlined pilot interface borrows from some 5th generation technology, integrating information into easier to manage displays that allow the pilot to focus more on the battle space than the gauge cluster. This not only improves pilot performance, it also reduces fatigue on long missions.

In order to keep pace with new weapons as they emerge, the F-15EX leverages what Boeing calls an Open Mission System architecture designed specifically to be able to absorb new tech as it reaches the field. Importantly, however, the new F-15s retain around 80% of the old F-15 design, making them easy for maintainers to adapt to. Instead of having to train for an entirely new platform, they need only to train for the more modern additions to a jet they’re already intimately familiar with.

How does the F-15EX stack up against the top fighters from other countries?

Despite its upgrades, the new F-15EX remains squarely within the 4th generation of fighters. There are currently four operational 5th generation fighters on the planet: America’s F-35 and F-22, Russia’s Su-57, and China’s J-20. If the F-15EX were to square off against these platforms, it would be at a huge disadvantage–and platforms like the F-35 or F-22 would likely be able to engage and destroy the F-15 before its pilot was even aware of their presence. Questions remain about the stealth and avionics found in the J-20 or Su-57, but even if their stealth isn’t quite as advanced, they’d still have a real leg up on the F-15EX.

But to be honest, the chances of such an engagement are incredibly small. Russia’s troubled Su-57 program has seen setback after setback, and to date, there are only around 13 of the fighters in existence. Production is expected to pick up, but Russia lacks the funds to really field a large scale fleet of these stealthy fighters. China’s J-20 has also faced woes in its engine compartment, though China has managed to field more than 50 of these jets already. The new J-20B will incorporate thrust vector control (like America’s F-22) and is expected to be an even more capable aircraft… but again, it exists in extremely limited numbers.