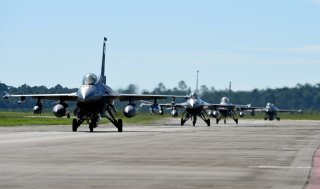 Here's What You Need to Remember: The two prototype aircraft performed admirably in the Air Force’s tests, which ultimately concluded that the F-16XL could fly twice as far, or carry twice as large a payload, as a normal F-16.

The General Dynamics F-16 “Fighting Falcon” jet fighter was first introduced in 1978. In the four decades since then, it has become one of the most ubiquitous fighter aircraft in the world. More than three thousand of the planes are in service in the air forces of more than twenty-five nations. Taken together, the planes have accrued nearly twenty million flight hours, a testament to their excellent design and versatility.

What is not as well known is that a variant of the F-16 was proposed for the U.S. Air Force’s “Enhanced Tactical Fighter” (ETF) program, a program initially designed to replace the retiring F-111 Aardvark. The program’s goals later expanded; it was expanded into the “Dual Role Fighter” (DRF) program, which envisioned the creation of a fighter able to travel longer distances to strike enemy targets without requiring fighter escort.

The F-16’s “F-16XL” variant was spun off from its “Supersonic Cruise and Maneuver Prototype” (SCAMP) project, which amounted to a research project. The major difference between the F-16 and the F-16XL was in the shape of its wing, which the second plane more than doubled. The plane’s cranked arrow wing shape was large and bulky, but it provided a critical advantage: it provided an enormous amount of lift when compared to the nimbler, more maneuverable wings on the standard F-16. While this design choice cost the plane much of its agility, the trade-offs were considerable; it could fly faster and more efficiently than the standard F-16.

Because of its greater range, the F-16XL fit the tasks put forth in the ETF program perfectly and was entered into the competition in the early 1980s. Two prototypes of the aircraft were built from existing F-16 airframes provided by the Air Force, although subtle modifications were included; the planes’ fuselage grew by several feet, and both lacked ventral fins on the underside, a standard feature on normal F-16s, as the larger wing provided greater stability.

The two prototype aircraft performed admirably in the Air Force’s tests, which ultimately concluded that the F-16XL could fly twice as far, or carry twice as large a payload, as a normal F-16. Ultimately, though, owing to cost concerns and minor design preferences, the Air Force chose the F-15E Strike Eagle instead, which remains in service. The two prototypes were initially returned to storage at Edwards Air Force Base; they were later loaned to NASA, which used them in aerodynamic research until 1999.