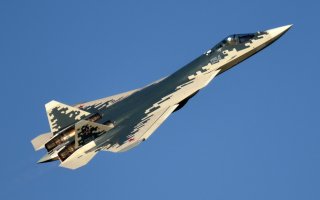 Here's What You Need to Remember: The Su-57 is a dedicated air superiority machine that is designed to hunt down American fighters such as the F-22 and F-35—where it is successful or not is the question.

In terms of sensors, it is unclear which aircraft is more advanced—it is clear however that the Russians and Chinese have completely different concepts of operation. The Su-57 was never designed as a genuine stealth aircraft and has a sensor suite designed to neutralize Western stealth aircraft. The Russians are hoping the Su-57’s sensor suite—which includes N036L-1-01 L-band radar arrays—will alert its pilots to the general vicinity of enemy fifth-generation stealth fighters such as the Raptor.

Russia and China are both developing next-generation fifth-generation fighters as they struggle to challenge American dominance of the international system. However, the two great powers are taking somewhat differing approaches to developing these new next-generation machines. Those differences are driven by a number of factors including threat perceptions and requirements as well as access to technology and financial resources.

In terms of overall kinematic performance, the Su-57 is likely a superior performer compared to the Chinese J-20. With its three-dimensional thrust-vectoring capability and ample thrust, the Su-57 is likely to have excellent low-speed high angle of attack maneuverability even with the current Saturn AL-41F1 afterburning turbofans, which are rated at 32,500lbs thrust each. The Russian jet should also have very good supersonic performance—with some degree of supersonic cruise capability even with the current AL-41F1 engines. However, once the Su-57 receives its second stage Saturn izdeliye 30 engines, which are expected to deliver roughly 28,000lbs of dry thrust and 42,000lbs of afterburning thrust, the PAK-FA should be able to achieve kinematic performance—including supersonic cruise and maneuverability—roughly on par with the Lockheed Martin F-22 Raptor. Indeed, as one now retired military official with extensive fifth-generation fighter experience had told me sometime ago: “Performance-wise it certainly looks to compete with the Raptor.”

While the Su-57 has excellent aerodynamic design, the Russian jet is far less stealthy than the Chinese Chengdu J-20, let alone American stealth aircraft such as the F-22 or the Lockheed Martin F-35 Joint Strike Fighter. While neither the J-20 nor the Su-57 is particularly stealthy compared to American fifth-generation fighters, the Chinese aircraft places more emphasis of radar cross-section reduction measures than the Russian jet. The Su-57 has numerous obvious radar cross section hotspots including its rounded electro-optical sensor ball—which shows no effort at faceting—its moveable leading-edge root extensions, where the leading edge flaps meet the outboard portion of the wing, its engine inlet design, and a host of other problem areas. In short, the Russians consciously chose not to emphasize stealth in the Su-57 design.

The J-20, however, is probably not designed as a dedicated air superiority fighter like the Su-57 is. Its concept of operations seems to be based on American ideas about how to operate a fifth-generation fighter aircraft. Not much is known about the specifics of the J-20’s avionics and sensor suite, but the Chinese jet seems to incorporate an active electronically scanned array, a chin-mounted EOTS, a passive infrared/electro-optical DAS 360-degree spherical camera system and passive antennas for an advanced electronic support measure suite similar to the F-35’s AN/ASQ-239 system.  The J-20 also seems to incorporate advanced datalinks, integrated avionics, and a cockpit with a display similar to that found on the F-35. Indeed, the J-20 likely has avionics that are broadly comparable to that found on the F-22 and F-35, but which are not quite as refined as their American counterparts.

The J-20 has a sensor suite similar to the F-35 because it is likely designed primarily as a long-range strike aircraft intended to threaten American bases and maritime assets in the Pacific. It would also likely have a role in disrupting American air operations during wartime by attacking U.S. aerial refueling tankers and airborne assets such as the E-3 AWACS, E-8 JSTARS, or E2D Hawkeye, and other similar support aircraft with long-range air-to-air missiles using its combination of speed and stealth. It is probably not designed to directly engage American fifth-generation fighters such as the F-22 or F-35 except in self-defense. By contrast, the Russian Su-57 is a dedicated air superiority machine that is designed to hunt down American fighters such as the F-22 and F-35—where it is successful or not is another question.