The F-22 Raptor Is a Fighter Pilot’s Dream 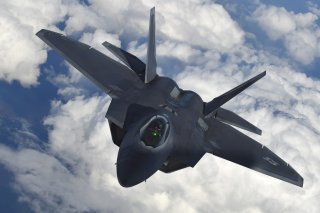 Here's What You Need to Remember: The Raptor was engineered with a unique weapons ability, a dynamic which has in recent years been massively upgraded. The Air Force, Raytheon and Lockheed have integrated performance-enhancing software upgrades into the F-22s weapons, to include the construction of newer AIM-120D and AIM-9X air-to-air weapon variants.

Video footage of the F-22 in action aren't hard to come by on social media platforms, but this 2:36 video—titled “INSANE F-22 Raptor Hype Video”— is unique in that it was produced by the actual F-22 Raptor Demonstration Team, which is stationed at Joint Base Langley-Eustis in Hampton, Virginia, and regularly engages in flights that showcase the unique capabilities of the aircraft. It offered Hollywood-worthy production values that highlighted the aircraft's ability to perform a variety of maneuvers; but also included rare slow-motion footage of the Lockheed Martin-built fifth-generation fighter.

The 360-degree video footage was reportedly the first to be filmed from a helicopter, and it showcased the F-22 Raptor's supermaneuverability as it flew over Joint Base Elmendorf-Richardson in March of this year as part of a JBER Salutes.

The Hype Video has also been about the best chance and perhaps only way to see the F-22 in action this year due to the coronavirus outbreak.

As The Aviationist reported, “Although most of the airshows this year were canceled because of the COVID-19 outbreak, the pandemic has not completely prevented the F-22 Raptor Demo team to perform some displays at the few airshows which have been held in a ‘drive in’ format with cars, filled with people in attendance, like the New York International ‘Drive In’ Air Show at the end of August, or the 2020 Wings Over Houston Air Show and Bell Fort Worth Alliance Air Show last month.”

The F-22 Raptor Demonstration Team flies the advanced stealth aircraft at air shows around the globe, and its demonstrations include the crowd-pleasing power loop, split and tailslide, as well as high-speed passes and dedication passes—maneuvers that are based on those designed for combat operations but are performed at much lower altitudes that most pilots are certified to fly.

The aerobatic display team has flown the F-22 since 2007, when the Air Force approved the aircraft for demonstration, and this replaced the Air Combat Command's F-15C demonstration team. The team participated in its debut air show at Tyndall Air Force Base (AFB) in March 2007, and since that time has performed in more than 250 demonstrations across the world.

The U.S. Air Force F-22 is widely regarded as the most dominant fighter in the world. The F-22 Raptor is especially respected for its dogfighting ability and air-to-air maneuverability attributes which many contend separately it into a superior category compared with any other potential rival.

Despite the fact that it entered service in 2005, it has steadily been updated. The Raptor was engineered with a unique weapons ability, a dynamic which has in recent years been massively upgraded. The Air Force, Raytheon and Lockheed have integrated performance-enhancing software upgrades into the F-22s weapons, to include the construction of newer AIM-120D and AIM-9X air-to-air weapon variants.

It also makes for one fun aircraft to watch in videos—thanks to the hotshots like the pilots in the F-22 Raptor Demonstration Team.