The F-35 Is Not Enough: Why the Air Force Wants an F-16 Replacement 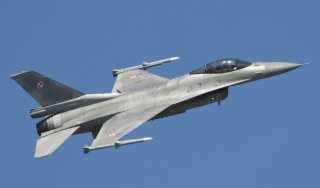 Here's What You Need to Remember: Beyond his rebuke of ongoing efforts to keep the F-16 platform alive with a fresh round of iterative updates, Brown’s comments are an implicit admission that Lockheed Martin’s F-35 Lightning II has been unable to meet the needs of the Air Force in a cost-effective manner. More fundamentally, there is a sense in which the F-35 stealth fighter has become the very problem it was meant to solve.

The U.S. Air Force (USAF) has launched a months-long tactical aviation study, seeking a sustainable growth strategy into the coming decades. Nominally, the study wants to find a replacement for USAF’s hundreds of aging F-16 fighter planes. The idea—floated recently by Air Force acquisition chief Will Roper—of ordering new F-16 variants has fallen by the wayside among some USAF officials, with Chief of Staff Gen. Charles Q. Brown Jr. suggesting that the F-16 platform lacks the mission systems capability and networked software sophistication to be a serious contender. “Actually, I want to build something new and different that’s not the F-16; that has some of those capabilities, but gets there faster, using our digital approach,” said Brown. At an average age of twenty-eight years old, Brown believes that USAF’s current roster will struggle to keep pace with competitors. “That’s why this force mix study is so important: to bring down the average age, to have something relevant not just today, but well into the future,” he added.

Instead of squeezing more performance out of decades-old platforms, Brown said he is interested in a “clean sheet design”—a “fourth-and-a half/fifth-gen minus” fighter that is lightweight and affordable. But beyond his rebuke of ongoing efforts to keep the F-16 platform alive with a fresh round of iterative updates, Brown’s comments are an implicit admission that Lockheed Martin’s F-35 Lightning II has been unable to meet the needs of the Air Force in a cost-effective manner. More fundamentally, there is a sense in which the F-35 stealth fighter has become the very problem it was meant to solve. As it was originally conceived, the F-35 program closely resembled the kind of lightweight, cost-effective fighter that Brown wants to procure in the present day. But as the program matured, USAF and Lockheed Martin tried to pack the F-35 platform with a growing list of cutting-edge avionics and performance features. These ever-shifting goalposts imposed a vicious cycle of delays spurred by cost overruns. Without mentioning the F-35 by name, USAF succinctly pinned down this dangerous and counterproductive phenomenon in their “Air Superiority 2030” report. The report called on the Air Force to reject thinking based on “next-generation” platforms. “Such focus often creates a desire to push technology limits within the confines of a formal program… pushing those limits in a formal program increases risk to unacceptable levels, resulting in cost growth and schedule slips,” it argued.

Brown appears to be framing the F-35 as a high-end tool to fulfill a specific deep penetration and sensor fusion niche, but one that cannot serve as a mass-producible, low-mid end fighter. “I want to moderate how much we’re using those aircraft,” he said. “You don’t drive your Ferrari to work every day, you only drive it on Sundays. This is our ‘high end’ [fighter], we want to make sure we don’t use it all for the low-end fight … We don’t want to burn up capability now and wish we had it later.”

Will the Air Force finally get the affordable new workhorse fighter that the F-35 was meant to be? Brown acknowledged that not everyone in USAF shares his development vision, predicting that “there is going to be some tension” and that he will have to make unpopular decisions to guarantee USAF’s technical sustainability into the coming decades. But, he posited, “If I don’t do that, we don’t accelerate change. I’m not sorry about that. There will be some folks who don’t like me, or don’t like what I decide, but I want to move forward with what I think is best for the Air Force.”