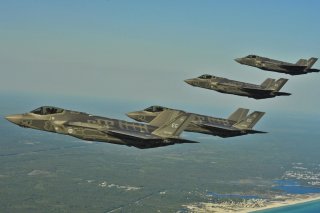 Here's What You Need to Remember: While aircraft-launched drones, such as the Perdix launched from the flare chaff of an F-16, have been successfully tested for quite some time, the newest challenge has been making air-recoverable drones possible as well, such as those demonstrated successfully in DARPA’s Gremlins program.

Mini-drones can blanket an area with surveillance, test or overwhelm enemy radar and conduct missions while operated by B-21 stealth bomber or F-35 stealth fighter jet crews in a cockpit. Such small drones could even themselves become explosives to attack and disable air defenses, presenting yet another reason why many in the Air Force are calling for a large increase in the service’s mini-drone fleet.

Medium and small recoverable drones are in particular demand, given the tactical advantages they can increasingly introduce into modern combat. A new policy paper from The Mitchell Institute for Aerospace Studies called “Understanding the Skyborg and Low-Cost Attritable Unmanned Aerial Vehicles,” suggests that the Air Force needs to acquire large numbers of A/R UAVs, develop the concepts of operation needed to support their tactical employment, and develop the logistical infrastructure necessary to sustain them.

The potential combat uses for these kinds of drones have few limits, as they can both support combat as well as engage in direct fires when operated by humans performing command and control. The Air Force’s significant “loyal wingman” concept, under development for several years now, lends itself to these kinds of platforms.

The tactical approach, wherein manned air platforms operate multiple drones from the cockpit in the air, is already coming to fruition through programs such as the Air Force Research Laboratory’s Valkyrie drone. Without needing to send data through a ground control station, emerging technology reduces latency and increases tactical advantages by enabling pilots themselves to operate forward drones conducting surveillance, jamming enemy platforms and even firing weapons.

Also of great tactical significance, the study makes the point that A/R UAVs can operate in forward, high-risk locations more easily by virtue of not needing a runway or fixed infrastructure to operate.

“The greatest combat value might be achieved by using them for non-kinetic missions such as electromagnetic warfare, persistent C2ISR, as part of kill meshes, and other operations that multiply effects,” the study explains.

The concept, according to the Mitchell paper, is to supplement and support emerging, high-end manned platforms.

“Instead of replacing manned aircraft, the greatest combat value will result from determining how to best combine the operations of A/R UAVs that have some advanced survivability design features with 5th generation F-35As, B-21s, and other manned and unmanned aircraft,” the study writes.

While aircraft-launched drones, such as the Perdix launched from the flare chaff of an F-16, have been successfully tested for quite some time, the newest challenge has been making air-recoverable drones possible as well, such as those demonstrated successfully in DARPA’s Gremlins program.

The Mitchell study also makes a point to emphasize the often discussed issue of modularity, essentially referring to efforts to engineer an upgradable, common-standards based technical infrastructure enabling rapid adjustments to new threats and mission possibilities.

Kris Osborn is the defense editor for the National Interest. Osborn previously served at the Pentagon as a Highly Qualified Expert with the Office of the Assistant Secretary of the Army—Acquisition, Logistics & Technology. Osborn has also worked as an anchor and on-air military specialist at national TV networks. He has appeared as a guest military expert on Fox News, MSNBC, The Military Channel, and The History Channel. He also has a Master's Degree in Comparative Literature from Columbia University. This article first appeared last year and is being republished due to reader interest.