F-35C and More: These Navy Weapons Can Defeat Any Foe 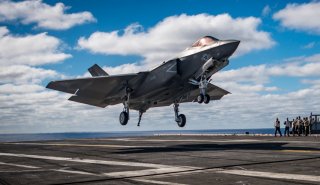 Here's What You Need To Know: The F-35C is specifically designed for carrier operations, and has several airframe reinforcement modifications to withstand high-stress carrier landings. It has larger wings to help flight at low speeds, and its wingtips are also foldable in order to give the airframe a smaller footprint when parked on space-starved aircraft carriers.

High-tech and high-powered are two phrases that come to mind when thinking about the world’s premier navy. America’s navy is full of advanced warships and airplanes as well as impressive firearms. Here is how the service packs its mighty punch.

One of Navy SEAL’s deadliest handguns is German: the Heckler & Koch MK23. Though no longer in widespread use within the United States Navy, the MK23 is impressive. Rather than adopting a sidearm in the ubiquitous 9mm pistol cartridge, SEALs decided that the .45 ACP would be a better, more powerful choice—and not just any .45 ACP ammunition, but high-powered 185-grain +P ammunition that generates approximately 10% greater chamber pressure than standard .45 ACP ammunition. The pistol itself is huge—but despite its large size is not an incredibly overweight handgun thanks to its polymer frame. It’s considered match-grade too, an accuracy designation afforded by a very high-quality trigger group and nearly six-inch barrel. And despite its large .45 ACP cartridge, the MK23 has a high twelve-round capacity.

The U.S. Navy’s Columbia-class will arguably be the world’s most powerful submarines when construction on the hulls is finished and the submarines enter service. They’re to replace the Navy’s older Ohio-class nuclear powered ballistic missile submarines and, like the Ohios, they’ll be armed with Trident intercontinental ballistic missiles—nuclear weapons that could literally destroy the planet. In order to avoid detection, the Columbia’s hulls will be covered with anechoic tiles, essentially rubberized tiles that are impregnated with small air pockets that can absorb enemy sonar and help hide the submarines. They’ll also have an advanced electric drive, which is said to be quieter than traditional mechanical drives as well as an advanced nuclear reactor.

One of the Navy’s most powerful sniper rifles is the Barrett M82 line of rifles and their derivatives. The enormous rifle came to life in the 1980s, in a Tennessee garage, made from hand machined parts. Since its humble beginnings, the rifle and its subsequent derivatives have been widely distributed throughout the U.S. military. Thanks to its massive .50 BMG cartridge, the M82 can accurately engage targets up to 1,800 meters—over a mile away. The rifle is fitted with a large muzzle brake to somewhat dissipate recoil and reduce shooter fatigue. It’s barrel is fluted as well, in order to reduce weight and increase heat dissipation during extended firing.

The United States military’s F-35 stealth fighter program is the most prolific stealth fighter program in history, and several variants of the capable fighter have been manufactured. The Navy’s version however is special. The F-35C is specifically designed for carrier operations, and has several airframe reinforcement modifications to withstand high-stress carrier landings. It has larger wings to help flight at low speeds, and its wingtips are also foldable in order to give the airframe a smaller footprint when parked on space-starved aircraft carriers. The larger wing area also allows the F-35C to carrier a heavier payload and have a greater range than other F-35 variants.