The F-35C Will Define the Power Projection of the U.S. Carrier Strike Group 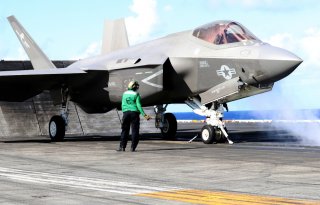 Here’s What You Need to Remember: The Navy aims to accept as many as 273 F-35C fighter jets into service, a procurement that will transform U.S. naval aviation and define the power projection capabilities of the American carrier strike group for decades to come.

Unmatched in its performance and versatility, the F-35C fighter jet is set to revolutionize the Navy’s carrier air wing.

Although commonly referred to in the singular, Lockheed Martin’s fifth-generation F-35 stealth fighter jet was designed as three separate planes, purpose-built to accomplish different tasks in three of the U.S. military’s service branches. The F-35A is a conventional take-off and landing variant that will replace Air Force’s venerable F-16 Fighting Falcon, while the F-35B is a short takeoff and vertical landing model tailored to the Marine Corps’ unique operating requirements. Finally, there is the F-35C: a catapult-assisted take-off but arrested recovery variant that is designed to operate from aircraft carriers as part of the U.S. Navy’s carrier strike groups (CSGs).

The F-35C was introduced in 2019 as the Navy’s first aircraft-carrier-based next-generation stealth fighter. The fighter embarked on its first CSG deployment aboard the Nimitz-class USS Carl Vinson in August 2021. Whereas the F-35A and B variants are widely similar in external design, the F-35C can instantly be recognized for its large foldable wings that are meant to save space on crowded aircraft carrier decks—the plane has a forty-three foot-wingspan as opposed to the thirty-five feet of its two A and B counterparts. It is the heaviest F-35 variant, boasting seventy thousand pounds at full payload capacity. It also carries the most internal fuel by a slight margin, though this does not translate into a significant combat radius advantage over the F-35A. The F-35C carries over five thousand pounds worth of weapons in its internal weapons bays or a combined eighteen thousand pounds in external and internal slots for situations where the fighter can afford to sacrifice stealth performance in exchange for maximum firepower.

The Navy’s current workhorse fighter, the Boeing F/A-18E/F Super Hornet, has a combat radius of just under four hundred nautical miles. This is a serious potential vulnerability at a time of rapidly growing Chinese and Russian tactical strike capabilities. The latter will soon field the formidable new 3M22 Tsirkon winged, hypersonic anti-ship cruise missile. With a range of up to one thousand kilometers (around 621 miles) and flight speed of around Mach 9, Russian military officials and defense experts are projecting confidence that Tsirkon can effectively bypass the surface-to-air systems of CSGs and disable U.S. aircraft carriers with just one hit. The Chinese military is developing parallel capabilities with its hypersonic DF-17 medium-range ballistic missile. This means that, in their current form, the Navy’s carrier air wings will increasingly be forced to operate within strike distance of the latest Russian and Chinese missiles, putting their CSG at greater risk and compromising the formation’s ability to effectively project power.

That’s where the F-35C comes in. With an unrefueled combat radius of 670 nautical miles, Lockheed’s fighter reduces the potential for missiles like Tsirkon to threaten the Navy’s CSG’s whilst enhancing the formation’s battlespace persistence. As a fifth-generation stealth fighter, the F-35C is more survivable than the Super Hornet. Not only is it safer to operate across the board, but the F-35C vastly expands the Navy’s scope of mission possibilities—these include strike missions against high-value targets deep into enemy airspace, as well as the potential to execute multiple strikes within a single sortie. With arguably the most advanced and robust sensor suite of any active-service fighter in the world, the F-35C likewise introduces a whole new dimension of networking and interlinked performance. The fighter acts as a force multiplier for the rest of the CSG with its groundbreaking “sensor fusion” capabilities, painting a dynamic picture of the battlefield for nearby friendly sea, air, and ground units.

The Navy aims to accept as many as 273 F-35C fighter jets into service, a procurement that will transform U.S. naval aviation and define the power projection capabilities of the American carrier strike group for decades to come.