F7U Cutlass Fighter Jet Was Hated—By Its Own Pilots 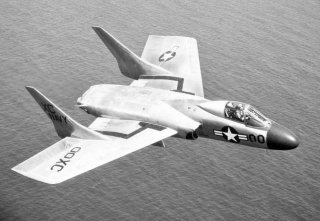 Here's What You Need to Know: The prototype first flew in September 1948, and problems began almost immediately.

Rex Beisel designed the legendary F4U Corsair fighter, a World War II piston heavyweight that served through the Korea conflict and was “one of the U.S. Navy and Marine Corps’ finest fighters,” according to the National Naval Aviation Museum.

But Beisel also invented the F7U Cutlass jet, which was not anyone’s idea of a fine fighter. The Cutlass “was ahead of its time and the capabilities of available power plants, resulting in its nickname the ‘Gutless Cutlass,’” the museum noted. “Structural shortcomings and its underpowered engines plagued it, resulting in several deaths and the loss of over a quarter of all F7Us built to operational accidents.”

The 320 Cutlasses that Vought built ended up killing no fewer than 25 pilots in wrecks.

The prototype first flew in September 1948. The problems began immediately. All three XF7U-1 prototypes crashed, as did two of the first 14 production aircraft. The Navy wised up in 1949 and canceled an order for 88 F7U-2s in favor of the F7U-3.

The -3 version of the troubled fighter boasted several improvements. But it still was underpowered, however. And its nosewheel layout made launching and landing very difficult.

The nose gear was so tall that, while on the ground or a carrier deck, a pilot could barely see in front of his plane.

The gear also was unreliable, as Navy Times recalled. In the early 1950s a Cutlass pilot was flying near Naval Air Station North Island outside San Diego when the plane’s catapult bridle — a device that connected the nosewheel to an aircraft carrier’s catapult shuttle — jammed the gear strut. The nose gear could not fully retract or extend.

“Repeated efforts by the pilot to shake the bridle loose proved futile,” Navy Times noted.
“Because attempting to land on the jammed nose strut was deemed unsafe, the pilot of the Cutlass was directed to fly over the base, point the aircraft out to sea and eject.”

The pilot safely parachuted to the ground. A sailor speeded up in a rescue truck. Pointing into the sky, the sailor said, “Your buddy’s still up there!”

“Buddy?” the confused pilot said. “I don’t have a buddy up there.”

That’s when the pilot looked up and saw his unoccupied F7U flying a descending circle overhead.

“Both were frozen in place as they watched the jet continue to circle and lose altitude,” according to Navy Times. “Coming in lower, the unpiloted F7U-3 missed colliding with the central cupola of the famous Del Coronado Hotel by scant feet, then moments later neatly landed on Imperial Beach.”

On the 67th anniversary of the Cutlass’ first flight, the National Naval Aviation Museum took a wry tone. “Some naval aviators who had harrowing experiences in the aircraft maybe wished this [anniversary] had not occurred.”

The ungainly plane did make history, however, by being the Navy’s first fighter to deploy overseas with air-to-air missiles — early AIM-7 Sparrow Is — in 1956.