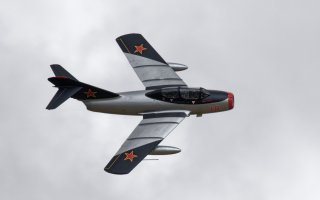 Key Point: “What fool will sell us his secrets?” Stalin is said to have commented on the British idea.

By the end of World War II, it was becoming clear that the huge fleets of piston-engine propeller planes used in the conflict would soon be superseded by much faster jet aircraft. Nazi Germany and the United Kingdom had deployed jets in combat, and the United States and Japan were close to doing so when the war ended. Only the Soviet Union seemed to lag conspicuously behind.

However, the Red Army captured numerous scientists, research facilities and prototype technologies when it rolled into eastern Germany—including Jumo 004 and BMW 003 turbojets designed for the Nazi’s Me-262 and wooden He-162 jet fighters respectively. In 1945, the manufacturers Mikoyan-i-Gurevich and Yakovlev were instructed to develop the first Soviet jet fighters using the German engines.

By early 1946 they had developed the Jumo-powered Yak-15 and the faster BMW-powered MiG-9. However, the German turbojets had infamously short service lives and could not generate the necessary thrust, so for their next major jet fighter designs, Soviet engineers suggested acquiring British Rolls-Royce Nene centrifugal-flow compressor turbojets that could produce 5,000 pounds of thrust.

“What fool will sell us his secrets?” Stalin is said to have commented on the idea. But when Soviet designer Viktor Klimov visited the United Kingdom in 1946, the British Labor government proved unexpectedly forthcoming. London was struggling to repay the United States for military equipment acquired through the Lend-Lease program, and Trade Minister Stafford Cripps appeared not to have grasped the escalating tensions of the Cold War. As a result, the United Kingdom sold dozens of Nenes to Russia in 1946 and 1947 under the condition that they not be used for military purposes.

The Soviets promptly reverse-engineered the Nene for domestic production as the RD-45—and then followed up with the more powerful VK-1, capable of 6,000 pounds of thrust. Ironically, the British would make limited use of the Nene themselves, though U.S. Navy F9F Panther jets did use a license-built version called the J42.

Mikoyan-i-Gurevich developed fighter with a nose-mounted VK-1 turbojet, and wings swept back at a 35 degree angle. Earlier featured in the Me 262, swept wings offer superior performance when approaching the speed of sound (around 600–750 miles per hour) by delaying the formation of shockwaves. The resulting MiG-15bis could attain a maximum speed of 678 miles per hour (mph), a hundred mph faster than British Meteor F8 and U.S. F-80 Shooting Star jets, while exhibiting excellent climbing speed and maneuverability.

The Soviets knew they had a winner in the MiG-15, codenamed the ‘Fagot’ by NATO, and went on to produce 12,000 of the speedy jets. Up to 6,000 more would be license built by in Czechoslovakia, Poland and China.

Soviet-piloted MiG-15s first saw action in support of Chinese Communists in April 1950 when they shot down Chinese Nationalist P-38 Lightning fighter and a B-24 bomber. When North Korea invaded South Korea in June 1950, the former’s substantial force of piston-engine warplanes was swiftly defeated once U.S. fighters intervened. Then American B-29 Superfortress bombers began blasting cities and military bases along the China–North Korea border in retaliation. Best known for the atomic bombings of Japan, the B-29 could carry heavy bombloads while tens of thousands of feet high, was relatively fast compared to earlier World War II bombers, and bristled with defensive machineguns.

In October 1950, Chinese and Soviet ground controllers began directing their MiG-15s to bushwhack the UN air raids. The MiG-15’s excellent climb rate meant that it could attain high altitudes and ambush bombers from above, while moving too fast for the defensive gunners to hit them. Furthermore, the MiGs outperformed U.S. F-80 escort fighters, let alone older piston-engine Corsair and Mustang fighters.

Though the UN pilots managed to shoot down several MiGs with their inferior aircraft, they could not effectively protect the heavy bombers. In April 1951, MiG-15s shot down three B-29s for no loss in April 1951—despite an escort force of a hundred F-80 and F-84 fighters. The United States discontinued more accurate daylight bombing raids for night operations. Meanwhile, the U.S. Air Force rushed to Korea a few dozen of its only advanced swept-wing fighter—the F-86 Sabre. Over the next three years, Sabers and MiGs in bare-metal finish would clash in countless air battles over the ‘MiG Alley’ along the Chinese border.

The F-86A and MiG-15bis were closely matched, but the Soviet fighter retained slight edges in climb rate, maneuverability and service ceiling. The Sabre was equipped with six .50 caliber machineguns, while the MiG-15 packed a heavier punch with its twin 23mm cannons with eighty rounds each and single 37mm gun with forty shells. The deadlier Soviet weapons were useful for shooting down large bombers, but had slower (and mismatched) muzzle velocities, making it harder for them to land hits against fast-moving fighters.

Ultimately pilot training and tactics would shape the outcome of the air war more than technical differences. While Saber pilots were mostly World War II veterans, the MiGs over Korea were mostly flown by competent but not as experienced Soviet pilots, with a sprinkling of veterans. (The participation of Soviet fighter units went unacknowledged by both sides to avoid escalating tensions.) Over time, the Soviets also trained more Chinese and North Korean pilots, who reportedly had to overcome deficits in education and even malnutrition. Chinese and later North Korean MiG units began to account for a larger portion of the sorties starting late in 1951 and suffered heavier losses.

By the end of the war, the U.S. Air Force claimed to have shot down 792 MiG-15s for seventy-eight Sabers lost in air-to-air combat, a 10:1 kill ratio—while the Communists states claimed they had come out ahead with 1,100 U.N. aircraft shot down, including 650 Sabres! It is probably more informative to compare self-reported losses: the U.S. Air Force reported losing eighty-four F-86 Sabers to all causes over Korea, and a similar number of other types specifically to enemy fighters (and many more to ground fire and accidents). The Soviets recorded the loss of 335 MiG-15s, the Chinese 225, and unofficial North Korean sources allege around 100 losses—but those numbers include accidents.

The MiG-15 was soon evolved into two successors: the highly maneuverable MiG-17, and the supersonic MiG-19, both of which held their own battling U.S. jets during the Vietnam War. Chinese MiG-15s and -17s clashed with Chinese Nationalist F-86s over the Taiwan Strait the rest of the 1950s, and a People’s Liberation Army MiG became the first aircraft shot down by a guided air-to-air missile when it was struck by a heat-seeking Sidewinder. Though the MiG-15 did not see combat after the 1950s, two-seat MiG-15UTI trainers continued to provide valuable service for many decades—though tragically, famed Soviet cosmonaut Yuri Gagarin perished while flying one in 1968 when his MiG-15 was jarred by a passing Su-15 interceptor.

The Nene turbojet engine gave the Soviet Union a remarkable leg up in the race to design high-performing jet fighters early in the Cold War. Unlike many short-lived episodes of technological one-upmanship, the baffling British blunder would have battlefield consequences in just a few years. While disparities in pilot training and experience resulted in an unequal kill ratio against the F-86 Saber, the threat posed by the MiGs still forced the U.S. Air Force to adapt its tactics and abandon its daylight strategic bombing campaign.