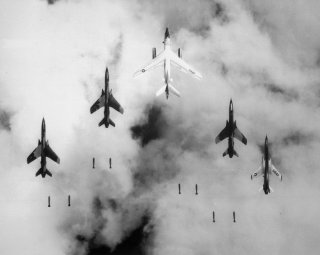 Here's What You Need To Remember: The consequences of the defoliant have been toxic for Vietnam. Birth defects, disabilities, and irreversable environmental damage are all results of the ten-year aerial bombardment. American veterans have suffered, too.

This dispersion of Agent Orange over a vast area of central and south Vietnam poisoned the soil, river systems, lakes and rice paddies of Vietnam, enabling toxic chemicals to enter the food chain.

In parts of central and southern Vietnam that were already exposed to environmental hazards such as frequent typhoons and flooding in low-lying areas and droughts and water scarcity in the highlands and Mekong Delta, herbicide spraying led to nutrient loss in the soil.

Today, Agent Orange has become a contentious legal and political issue, both within Vietnam and internationally. From 2005 to 2015, more than 200,000 Vietnamese victimssuffering from 17 diseases linked to cancers, diabetes and birth defects were eligible for limited compensation, via a government program.

This article by Jason von Meding first appeared in 2019 in The Conversation via Creative Commons License.